May 29, 2016
On select Sundays I will be reviewing some of the old Apple Paperback titles from my childhood. These titles were published, or republished by Scholastic during the 1980s & 1990s and were written and set in the United States. In Australia, these books were typically only available from libraries or could be ordered through catalogues that were distributed through primary schools. Most of these titles are now long out of print or have been updated and republished for later generations ... 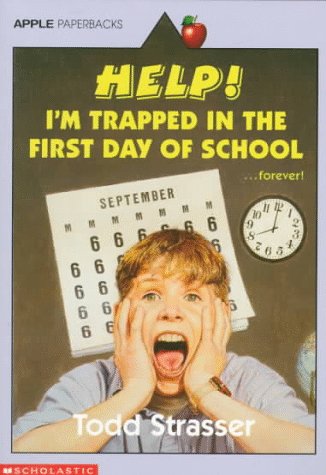 Delightfully reminiscent of Groundhog Day (there is even a reference in the beginning to a groundhog called Bill,) Help! I'm Trapped in the First Day of School is an entertaining yarn about Jake Sherman, an eighth grader at Burt Itchupt Middle School (otherwise known as Burp It Up, charming,) who is forced to relive his first day of school. Over and over again.

Jake is a good kid who is being led astray by his friend Alex Silver, a bully who wants to rule the school. The plan is this, as eighth graders, they are going to be the Kings of Wedgie, and are planning on giving some of the kids, especially Ollie, a new and nerdy sixth grader from Ohio a hard time. Naturally, reliving his experiences over and over again, leads Jake to discovering just how dull Alex's jokes are and just how much he misses his old friends. There is also a sweet subplot with another new kid, Amber.

The ending is predicable enough, though the journey is worth it. I actually quite enjoyed this one--it's another that I did not read during my childhood, which is unsurprising given that it was first published in 1994 and I was on the verge of growing out of the Apple Paperbacks by then and really only read the ones that were part of a series or that were by my favourite authors.

About the Author: Todd Strasser is a prolific author of books for middle grade and young adult readers, including the provocative Give a Boy a Gun which was published not long after the Columbine High School Massacre. There are 17 other novels in his Help!! I'm Trapped series, which were published by Apple Paperbacks/Scholastic between 1991 and 2011. Strasser wrote tie-in novels for Home Alone and Home Alone 2, and surprisingly, The Good Son, based on Ian McEwan's screenplay. He also writes under two pseudonyms--Morton Rue and T.S. Rue.
Apple Paperbacks Help! I'm Trapped Help! I'm Trapped in the First Day of School Todd Strasser