Review: Only Ever Yours by Louise O'Neill 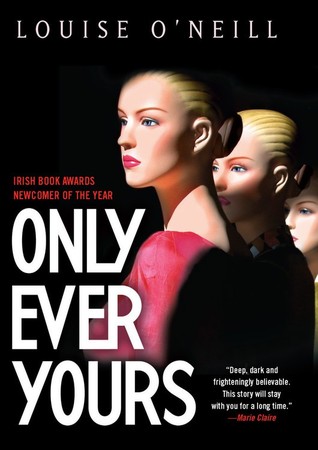 Only Ever Yours the debut novel by Irish author Louise O'Neill is a chilling dystopian feminist tale about a future world where women are considered useful only as wives to bare sons, or concubines to satisfy the sexual desires of men. Women are few and far between and are genetically manufactured to be "perfect" and raised in a type of school where they are taught nothing but how to look beautiful. At the end of their sixteenth year, each of the top ranked girls, or eves as they have become known, will be chosen by a prospective husband, while those who are not chosen will become concubines and the occasional one will become a chastity--basically the equivalent of a nun. But this year, something is going horribly wrong and frieda's future is anything but certain ...

This one was quite a disturbing read, set in a world were women are powerless and only a few are bred each year with the specific purpose of pleasing men. The conditions at the "school" where the girls are raised are horrific, there is no solidarity among the girls and nor is it encouraged. Everything for these genetically manufactured beauties is about finding a husband. And then there is the harrowing story of isabel, our heroine's former best friend who suffers the most, thanks to the desires of a selfish and greedy man.

What makes this story even more interesting is that the heroine, frieda, is not a strong character. She is unable to stand up for herself, even in situations when it would be entirely appropriate to do so and is too impulsive to play what few cards she has wisely. Of course, she does not deserve her fate and the ending is a surprising one for a YA novel, though completely appropriate for the story and for the first world, where some women are oppressed by societal expectations to dress and behave a certain way in order to be considered worthy.

Recommended, though not for the faint of heart.
Louise O'Neill Only Ever Yours