Review: The Natural Way of Things by Charlotte Wood 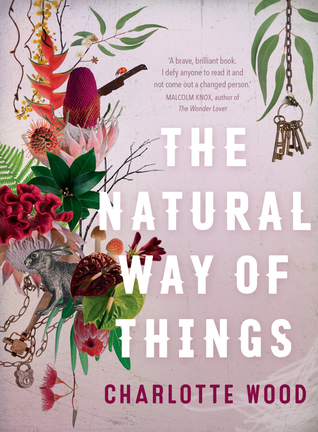 There has been a lot of talk about Australian author Charlotte Wood's latest novel, The Natural Way of Things, since it was released in October and it is not difficult to see why. This story is a great many things--shocking, well written and utterly addictive. It also focuses on what is one of the great taboo subjects of western culture, that of the wild woman.

The novel opens with two women who have found themselves drugged and imprisoned inside desolate outback lodgings. Along with several other women, they have their heads shaved and are forced to spend their days doing hard labour, under the cruel and watchful eyes of two men and one completely inept nurse. Soon it becomes clear that each woman has been involved in a high profile sexual scandal, and they have been sent to this place, run by the mysterious Hardings for "re-education." As supplies begin to run out, the balance of power slowly begins to shift and deadly games of power and politics begin.

An all ways, this novel is impressive. Wood does not shy away from demonstrating the blatant double standards and hypocrisy that the women are subject to. Their behaviour is considered terrible from the start, while their hapless but violent jailers, Teddy and the disgusting Bouncer, are allowed to get away with all kinds of atrocities. Even Nancy, the incompetent nurse, is never treated as an equal by the men (despite her being an employee and not a prisoner,) and makes the ultimate mistake of trying to make him like her, which leads to her eventual undoing. Its an interesting idea--that of a woman who tries to survive by winning the approval of the cruelest male in the room, and is left pining away in the face of his indifference and wondering what is wrong with her.

The two strongest women of the novel are the leading characters, Yolanda--a young woman whose scandal involves a football team--and Verla, whose scandal was her relationship with a government minister. It is the objective of Hardings to crush and break these women so that they will never be a "threat" to society again, however, both exert a kind of independence that allows them to outsmart their captors in surprising ways. Yolanda literally becomes the Wild Woman--the thing that we fear most, a woman who is untamed and unashamed, while Verla makes some tough choices. The other women feature as minor characters, though Hetty has her own shocking story.

Through Hardings (and their gift at the end,) there are also questions about corporate control, as well as that of how much do women really own their own bodies? To what extent is the punishment suffered by the women similar to the way that we often torture and humiliate others for what we perceive as transgressions? To what extent are we uncomfortable when women do not behave in the way that is expected of them?

The Natural Way of Things is a skilfully written novel about a situation that is unjust as it is shocking and will undoubtably stay with me for a very long time.