Review: Letters From the Inside by John Marsden 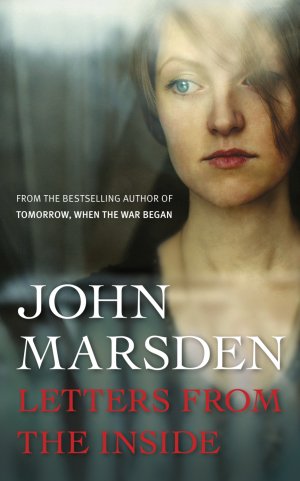 Twenty-five years after Letters From the Inside was first published this YA novel still makes a huge impact with its haunting cliffhanger ending. Set in an unnamed part of Australia back in the days before email, it opens with fifteen year old Mandy answering an ad that she saw in a magazine from Tracey, asking for a pen pal. The pair start corresponding, but soon it becomes obvious that Tracey is not being entirely truthful about her idyllic life. Eventually, it is revealed that Tracey is in the a maximum security area of juvenile detention centre and that she will be behind bars for a very long time. Cleverly, Marsden does not reveal the specifics of Tracey's crime, leaving readers to put the pieces together and to guess what actually happened. Meanwhile, Mandy, whom Tracey comes to rely on heavily (often referring to her as Manna, which is interesting given the biblical connotations of Manna,) has terrible family problems of her own, mostly to do with her violent and gun obsessed brother, Steve ...

John Marsden has never been an author who speaks down to his readers and he's never been one to treat his female characters like stereotypes, so it is unsurprising that this book has such an enormous impact. He allows readers to join the dots and to guess what happened, such as in the case of Tracey's crime (the implication is that she was an accessory to a violent crime gone wrong,) and what has happened to Mandy at the end of the book, and why Tracey's letters are coming back marked return to sender in an unfamiliar hand. Tracey's dreams, meanwhile, are troubling and full of violence and bloodshed. There is a lot left open to reader interpretation--did Mandy and the others in her family come to a violent end at the hand of Steve? Or are there other possibilities, such as Mandy not wanting to write any more now that she knows Tracey's full story, and she has asked her sister, who works at the post office to return the letters. Or considering Tracey's fraught mental state, is it a possibility that Mandy is someone who she simply made up, and Steve's violent urges were really her own. (In one letter, she mentions a desire to machine gun everybody in A Block.) There are no firm answers, and that's a big part of what makes Marsden such a great author. (In fact, on his website he even encourages readers to put some things together so that they can work out for themselves what happened.)

It is also an interesting account of what goes on inside an all female juvenile detention centre, the alliances, the fight to be top dog and cruel games that the girls play with one another. And then there is the shocking abuse that all the girls suffer at the hands of their wardens, such as one inmate who is forced to inhale her own vomit.

Although a little dated in parts, this is probably one of the best novels that could ever be placed in the hands of a reader who wants to discover how books can be more than tales about heroes and villains, and how sometimes, a careful re-reading can lead them to discovering more about the story.