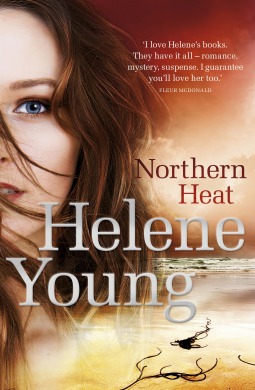 It's no surprise that Helene Young is one of the most popular Australian romantic suspense authors of our time when her books tick all the right boxes--likeable, but mysterious characters? Tick. Romance? Tick. Nail biting situations? Tick. A unique Australian setting? Tick. Northern Heat ticks every right box for its genre.

Although it can be read and enjoyed as a stand-alone novel, Northern Heat opens with Conor, the former accountant and amnesiac who played an important role in Young's previous novel Safe Harbour. This time around Conor takes centre stage. Using an assumed name, he has found safety and quiet in Cooktown, a small town in northern Queensland, where he spends his days working as a deckhand and volunteering at the local youth centre. He also feels, well, some affection for the lovely-but-mysterious single mother, Dr Kristy Dark who has some past secrets of her own. As a storm closes in on the small community, both Kristy and Conor are forced to confront their pasts and put their trust in one another if they want to survive ... and to rescue Kristy's daughter Abby who has found herself in terrible danger.

Domestic violence is discussed within the novel in a very relatable way and with real heart and understanding.

I enjoyed reading this one, and found myself so caught up in the plot that I read the second half in a single sitting. Conor makes for an interesting hero and it was wonderful to see him take centre stage after his mysterious arrival in Safe Harbour. Kristy was a believable heroine who was quite easy to like and relate to--and she certainly had her hands full with her daughter Abby, a nice kid who is being led astray by another girl.

Note: I won this novel several months ago in a competition. Thank you to Helene Young, Penguin Books Australia and Book'd Out for my copy. Apologies for taking so long to post a review.