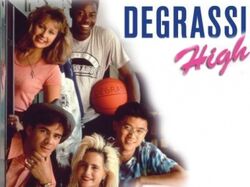 Like most kids who grew up in Australia in the late 1980s/1990s, some small part of my childhood was spent watching reruns of Degrassi Junior High and it's sequel series Degrassi High which used to air on The Afternoon Show on the ABC. For those of you who don't know, Degrassi Junior High was a Canadian television series made for teens that didn't shy away from discussing some gritty real life issues--such as the time that Wheels ran away from home, went hitchhiking and was groped by some creep who picked him up. (I remember my eleven-year-old self watching this, shocked.) A next generation series of this started production several years ago and has gone on to be quite successful, and like its predecessor gets repeated all the time on ABC3.

Anyway, my own fandom/interest in the show was fairly limited, I probably wouldn't have watched it or sought it out had my older brothers not been watching it and it was more or less forgotten after they both grew out of it. I can tell you most of the big events that happened throughout the series i.e. Wheels adoptive parents die, Spike got pregnant and (temporarily) kicked out of school, but I would be struggling to name most of the other characters (with the possible exception of Joey, who I found so annoying that I would much rather erase him from my mind permanently,) and the various social issues that they encountered, with the surprising exception of one character who made rather an impression on me. And I say surprising, because there is probably no one else on the planet who would ever admit to this.

My favourite character from Degrassi is Michelle Accette.

Michelle was really only a minor character in the first couple of seasons, but the character, who was quiet and softly spoken, came into her own after an episode about shyness (something that I could definitely identify with,) and was an important character in Degrassi High. Michelle never stopped being shy, but her character became a surprisingly strong one in spite of this. One storyline had her defy her parents to date BLT (her parents disapproved of the match because BLT was black,) and she continued to date him, because she thought that it was the right thing to do and that her parents were the ones who were wrong. That sort of thing takes guts. A lot of guts. Later, when she found out that BLT had cheated on her, and some of the lies that he had told his new girlfriend, she confronted him in the school cafeteria and set everyone straight.

Michelle's defining moment, however, was that she was the first character on the series to move out of home.

If I recall right, this happened when the character turns sixteen. Living alone with her newly divorced father, Michelle was unable to abide by her dad's strict rules. Now, I don't know about anyone else, but I always found the parents in the Degrassi universe to be a bit odd and a bit distant, and Mr Accette is definitely both of those things. I also found him to be somewhat creepy, though it is difficult to say how, apart from the fact that he was a bit racist, a bit strict and he did have a right to be annoyed about Michelle's mother walking out on the family to be with another man. (Then again, maybe a careful watching of this scene explains it. Something about the way he takes his daughter's hand makes me uncomfortable.)

Anyway, the storyline about Michelle leaving home is one about independence and shows her finding a place to live and a job, though a year later, she finds that she is unable to cope with her increasing load of homework, whilst trying to study at a busy boarding house and eventually patches things up with her dad, and stands up to him. Yay for Michelle. The shyest and seemingly most insecure character is, deep down, also one of the strongest.

That said, there is also something about that particular story arc that bothers me. When Michelle leaves home, she chooses not to stay in contact with her dad, which, obviously, is her choice even if it does seem a little bit misguided. When she returns to his house, a year later, he seems delighted to see her and it's obvious that the pair have not seen each other or spoken during that time. Huh? Was Degrassi big enough that two people who were related could completely avoid one another for an entire year? Michelle never once bumped into her dad at the supermarket, or even in the street. Mr Accette made a token attempt to visit Michelle at her work, but that was basically it. We're supposed to think that for an entire year this character lived alone with no contact with her family whatsoever. If Mr Accette was so delighted to see Michelle when she returned, did he never make any meaningful attempts to stay in contact, other than one visit to the donut shop where, quite frankly, he acts like a complete tool, laying on guilt trips and never allowing his daughter to tell her side of the story? Because Degrassi was a series for teens, probably, and the whole point was to show that a teenager could live independently if they needed to. Anyway, it's an interesting storyline for a series that broke a lot of new ground and went on to become a classic.
Degrassi High Degrassi Junior High