Review: All That We Left Behind by Robin Talley 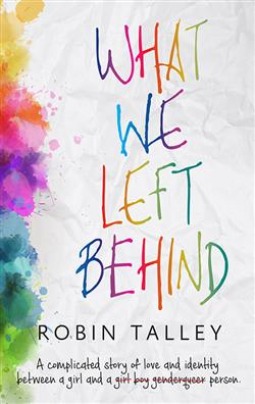 What We Left Behind is a beautiful, coming of age novel that featuring two young people who are searching for a sense of self. It is also a love story. It is also mass market fiction published by Harlequin Teen which makes the next bit even more surprising--the young couple at the heart and soul of this story are Gretchen, an openly gay teenage girl who is comfortable with her sexuality and Toni who identifies as genderqueer. Throughout the past two years of high school, Toni and Gretchen have been the 'it' couple at their school and their relationship is fairly smooth. But when they start college--Gretchen at New York University and Toni at Harvard, the distance and their differing experiences begin to tear them apart. For Gretchen its the chance to make new friends (including the repulsive Carroll and gothic Samantha who proves herself to be quite sweet despite appearances,) while Toni is befriended by some transgender upperclassmen and begins to ask some big questions about gender and identity and slowly begins to make some even bigger decisions. Is Toni truly genderqueer, or is she transgender as her new friends seem to think?

The big question is, of course, can their relationship survive? Will their differences ultimately force them apart? Or can they still be the same couple as before, as Gretchen and Tony? Do they even want to be?

I enjoyed reading What We Left Behind. One of the biggest joys of reading is, always, the opportunity to walk in someone else's shoes and to learn and understand what they are going through. Gender identity isn't something that I've ever had to think a lot about, so I was fascinated by Toni's journey--not only the struggles with things like wanting the right to wear pants to high school, but the other things that cis gender people are probably extremely ignorant of, such as how gender based the English language actually is, and how much we focus on labels instead of trying to respect and understand others as people. And that perhaps, even when other people have the best of intentions, gender identity is a very personal thing and one should not apply labels to anyone else--even Toni's new friends seem a bit too keen to assume that Toni is transgender and keep referring to Toni as a 'he.' And then, of course, there is Gretchen's story--she's very much the character who is left behind and forgotten as Toni searches for a sense of self and the author did an exceptional job of showing her hurt and frustration. And there are some sad bits as the characters struggle through the transition from high school to college, which is always a difficult, icky time.

This is a complex and diverse story with a few sad bits and stumbling blocks, and cliffhanger ending. It is also one that is well worth the journey. Recommended.
Robin Talley What We Left Behind