Review: The Age of Miracles by Karen Thompson Walker 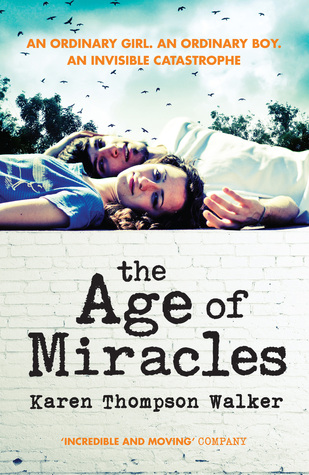 The Age of Miracles is a clever coming-of-age novel set against a surprising backdrop--the end of the world. On a Saturday morning, eleven year old Julia wakes up and discovers that the earth is slowing down. The earth no longer spins as quickly as it used to and is becoming slower with every turn. The inhabitants of planet earth are on borrowed time and no one knows when earth will finally stop. Interwoven between disastrous efforts by the human race to cope (including the controversial 'clock time' which no longer reflects the length of actual days, and attempts to flee, but with nowhere to go,) is Julia's own coming of age which includes a betrayal by a supposed best friend, her first love and an unsavoury discovery about her father. Much like the slowing of the earth, the narrative is slow and thoughtful.

I enjoyed reading this one, despite its depressing premise, for its meditations on human nature and the (often flawed) way that people try to cope in the face of adversity. The prose itself is very clever and a pleasure to read. This is clever, complex, literary YA that should be compulsory reading for anyone who wants to discover the fragility of the human race.