December 03, 2014
Welcome to another edition of Writers on Wednesday. This week I am chatting with Queensland based and New Zealand born author, Michelle Irwin ... 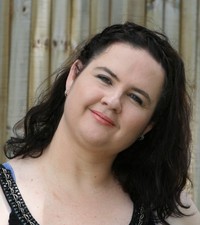 My name is Michelle, I’m from sunny Queensland, although I originally hail from the Land of the Long White Cloud (New Zealand). I’ve been writing on and off for about five years, but have only just made the leap to actually publishing any of my stories.

My debut novel, Through the Fire, is due on (was published on) 31st October. It’s a paranormal romance about Evie Meyers, a young girl with a unique heritage, and Clay Jacobs, a member of an organisation hell-bent on wiping the Earth clean of non-humans.

Just finding the courage to publish. It is very easy as a writer to become so involved and invested in your characters and world that you don’t want to share for fear of them not being accepted by other people. Even though my stories are not about autobiographical, it’s inevitable that after so many hours working on them they have part of my soul buried inside.

I have so many projects. When I first signed onto my publisher, it was with the understanding that
Through the Fire would be part of a series. We discussed it and agreed that it would be best to try to get as much of the story down while we were waiting for edits and everything. So out of eight books total in the twin series, I have seven already written, but they’re at various stages in the editing process. I’m working on the eighth and final book at the moment.
In addition, I have Happily Evan After, due for release on 13th December, which is undergoing final edits at the moment. There’s another three stories I’m actively working on. I’ve always been a bit of a multi-tasker like that.

I am only a very recent convert to eBooks, so much so that I only have a Kindle app and not a Kindle etc itself. I do like the convenience of it. No matter where I go I always have my phone on me, so I always have a book on me.

However, nothing can beat the feeling of holding a proper book in your hand, of the aching arms when you’ve been holding it up for so long, desperate to read just one more page, and the feeling of accomplishment as the pile of pages of your left grows while the pile on the right gets smaller.

I’m indie publishing. Even though my book is through a publisher, they are a small, indie press. I chose them because of the personal approach they give. Happily Evan After is going to be my first fully self-published book, which I’m excited about, but I definitely do like having the guidance and assistance of a good publisher and editor at my side too. Of course, if a traditional publisher came my way offering me significant advances and a decent marketing budget, I’d be very hard pressed to say no. I just think it’s an exciting time to be an author because this is even an option.

If I’m working purely from a “what book have I enjoyed the most and read most often” I would have to say Lord of the Rings. JRR Tolkien’s prose can be a little purple at times, and there are definitely places where he goes into a little too much detail about the small things which don’t really add much to the scene, but it’s just such an epic book that takes the reader on a real adventure.

Hi! I actually used to live down that way many, many moons ago. Would love to come back to visit again one day.

Though the Fire links: