Review: One Kick by Chelsea Cain 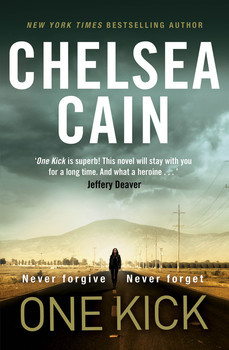 The debut novel in Chelsea Cain's Kick Lannigan series is a face-paced, arse-kicking tale of a young woman who wants to avenge her dark past. Kathleen "Kick" Lannigan was abducted as a six year old, subjected to a horrific ring of paedophiles and was routinely exploited in a number of videos that are still circling the internet. Rescued by FBI agent Frank at age twelve, she has struggled to adjust to the real world and suffers a difficult family life--her father left, her mother used Kick's abduction as a means of becoming a media star and her sister hates her. She considers her real family to be James, a fellow abductee who she bailed from a mental institution. Together, Kick and James follow the investigations of missing children carefully and they make for a great team--she's a kick arse fighter, good with a gun, he's a reclusive software developer who can create all kinds of programmes to follow people. When two children go missing in circumstances close to their own, Kick and James try to create ways to find them. And then a mysterious and somewhat untrustworthy man named Bishop breaks inside Kick's home. He wants her help to find the children.

One Kick is not a novel for the faint hearted. From a personal perspective, I struggled a bit with some of the themes of paedophilia--though to the credit of the author, she sure knows how to create a disgusting villain. The novel is also loosely inspired by the real life abduction of American teenager, Elizabeth Smart. (Read more here.)

One Kick was a real page turner, that I read in a relatively short space of time. Bishop is an interesting contrast to Kick--while she is vulnerable and fights for justice, he is manipulative and untrustworthy and one cannot be entirely sure who or what he is fighting for. Cain's prose is short, fast and unsentimental, which will no doubt appeal to readers looking for an action packed read. The ending leaves some questions open, leading in to the as-yet untitled sequel, which will be available in August 2015.

I suspect this one will be a must for crime fans.

One Kick will be released in Australia on September 1.

Finally, a big shout out to Simon and Schuster Australia for my review copy. Thanks!
Chelsea Cain One Kick