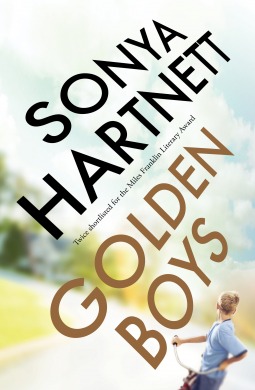 Sonya Harnett's latest release is a quietly menacing tale, telling the story of a group of working class kids and one very charismatic, but not-quite-nice adult. Set in an unnamed Australian suburb during the 1970s, we meet the Kiley's, a large, working class Catholic family and the Jenson's--a new family in town with a dad who comes across as slippery, but quite charismatic. Rounding out the Kiley and Jenson kids--Freya, Declan and Syd Kiley (and their younger siblings,) and Colt and Bastin Jenson is Garrick and Avery. Garrick is the bully among the kids, while Avery is a bit of a victim. A neglected child who has been sent to live with his grandparents, no one seems to look out for him. Until he is befriended by Rex Jenson.

Colt and Bastin 'Bas' Jenson are spoiled, 'golden boys' who are lavished with every kind of toy and trinket imaginable from their father, including a BMX bike. The novels opening, with Colt and Bas being presented with the next bike from their father, who teases them quite a bit with a game that is more for his amusement than theirs (making them guess the colour and telling them that they had it wrong on a technicality,) and thus subtly proving that Rex is not a man who should be trusted and who appears to enjoy, to some extent, the suffering of others. I found that the author nailed the character of Rex Jenson quite subtly, yet quite brilliantly in this chapter, as well as Colt's disappointment in his father and a gift that was more for Rex and his amusement than presenting his sons with a much wanted or needed gift. (The boys already each have an almost new bicycle.)

What becomes less subtle as the narrative wears on is that Rex Jenson is quite eager to appeal to the neighbourhood kids, particularly the boys, using gifts of ice creams and the promise of being allowed to share in the family pool and Colt and Bas' many toys, as well as offering a surprising amount of medical attention to Avery's injured knee. As a reader I knew what was probably going to happen, but the when and how, and the length that Rex would go to in order to cover his actions or to make them see okay, was what kept me reading. Harnett is never graphic in her descriptions, rather the story is about the charisma of a predatory adult, juxtaposed against those who feel that they have no right to speak back. I wonder if readers may struggle to come to terms with the novels ending, though it is realistic and there is a funny sense of retribution--or eye for an eye perhaps. The ones who suffer most after the kids caught in the crossfire and we get a real sense that life is not going to be easy for Colt, who knows that what his father is doing is wrong, but is powerless to stop it.

It's difficult to say I enjoyed a novel with such a heart wrenching plot, but I did enjoy the writing which told the story from the perspective of the kids and never strayed into the adult world, and felt that Hartnett very cleverly developed her characters and the sense of unease. Highly recommended.

Finally, a big shout out to The Reading Room and Penguin Books for my review copy. Thanks.
Golden Boys Sonya Hartnett