June 25, 2014
Welcome back to Writers on Wednesday. This week I put my questions to Sarah Bourne, author of Never Laugh at Shadows ... 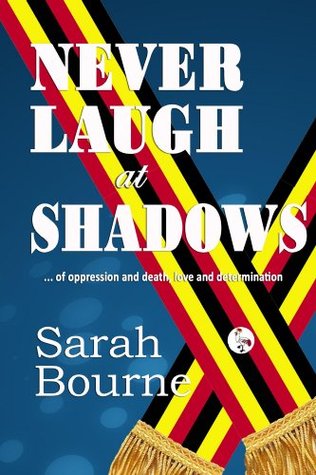 Tell us a bit about yourself ...

I was born and raised in London, escaped to work in the USA after college, and have been on the run ever since. My first training was in Occupational Therapy, and I worked in Mental Health to fund my passion for travelling, finally arriving in Sydney's Inner West where I intended to stay for two years, and forgot to leave. Now I run my own Counselling practice, teach Yoga and write. My husband, three children, two dogs and cat are all very supportive and long suffering when I disappear into books and writing for days on end.

Tell us about your recently published book ...

Never Laugh at Shadows is the story of Winsome Natakunda, a young Ugandan woman born into a family on the wrong side of politics. Her father was a Democrat in the brutal Amin and Obote regimes, and regularly taken away to be tortured for his beliefs. He and his family lived in fear, as did many people at the time. As a young woman, Winsome goes to London to study, but away from her family, and with no news from them, she becomes so anxious and depressed that she attempts suicide. In hospital she meets Angela, a woman with a long history of mental illness, who helps her piece her life back together. Winsome and Dominic, Angela's son, fall in love, but Winsome knows that she must go home and find out what's happened to her family. She arrives to discover that her father has been tortured again, that her mother talks to spirits in the  graveyard at night, and that there is a new epidemic in her country – AIDS. She knows she has to stay, but she is so torn about leaving Dominic... Essentially, it is a story of love, loss and resilience.

That would be in the school magazine when I was about twelve. We had to write a story about something that happened in the summer holidays. I'd been to Devon and spent quite a bit of time hanging around a haunted castle. My story of trying to stay there one night to see the ghost became an overnight sensation in the school mag! And many years later, became the opening scene for a YA trilogy. I was offered a contract for the trilogy, and turned it down – partly because I thought the publisher, who shall remain nameless, was a bully, and partly because the lawyer I consulted about the contract suggested that I should be getting more out of it! I sent it to another couple of publishers and agents, none of whom were interested, and lost heart, so now it's languishing in a virtual bottom draw. I think of that whole experience as my apprenticeship and a very steep learning curve!

Well, getting published has to be it. I actually entered the manuscript into a competition, the prize for which was a publishing contract. Months later, when I'd given up all hope and practically forgotten about it, I received an email to say I'd been long-listed. Three weeks later, I was told I'd been short-listed. Two weeks after that, I had the news that I was a runner up. I was disappointed, but at least I had something now to put in a pitch letter to other publishers or agents. Then, a few days later, I received yet another email from the publisher saying that they wanted to publish it anyway! Excited doesn't cover how I felt. I danced, I sang, I called all my friends, tweeted, facebooked...

What are you working on now?

Well, apart from the work of trying to get book sales up – endless marketing – I'm researching solitary confinement. I have an idea for a book that involves a woman being arrested as a terror suspect and being kept in solitary for weeks on end. From a psychological point of view, the consequences of solitary confinement are very interesting, and having worked in Mental Health, I always like to have something edgy to get my teeth into.

I'd love to have a little getaway at a beach where I could sit and write with the waves pounding the shore in the background, or even a study at home that I could retreat to. The reality, however, is that I sit with my laptop in the family room when the kids are at school, and tap away with the dogs looking at me with their soulful eyes pleading for a walk, and the cat on my lap – or keyboard! I suppose that's one of the great things about writing – you really can do it anywhere.

Which do you prefer, ebooks or paper books, and why?

I love real books that I can hold and turn the pages and see in my bookshelves. And I love bookshops  and always spend far too much in them! But I have to admit that I do have a kindle, and I read on it quite a bit just for convenience, and the fact that I can finish one book and immediately download another – I am a voracious reader. I hope that we never see the end of hard copies of books though. That would be really sad.

Aside from your own book, of course, what is one book you feel everybody should read?

I'm going to be slippery here and dodge the question! I have loved so many books in my life that I couldn't possibly choose just one that I think everyone should read. It all comes down to personal preference. I love crime fiction (not that I write it!). Having said that, I'm drawn to any work of fiction that is peopled with strong characters and has a plot that I can feel involved in. Some contemporary authors I love are Kate Atkinson, Kamila Shamsie, William Nicholson, Henning Mankell, Chimamanda Ngozi Adichie, Anne Patchett...the list goes on and on. And then there are the classics, Dickens, Hardy, the Brontes, Jane Austen, Turgenev, Dostoevsky, Hesse...

Finally, is there anything you would like to say to your readers in Adelaide?

Hello! I loved Adelaide when I visited some years ago, so I think you're all lucky to live there. And so close to such great wine country!

The book isn't in bookstores yet, so it can be found on Amazon US, Amazon UK or on BookTopia.com, in paper or digital versions. If you live in the US or UK, you should be able to get the book in bookshops soon.