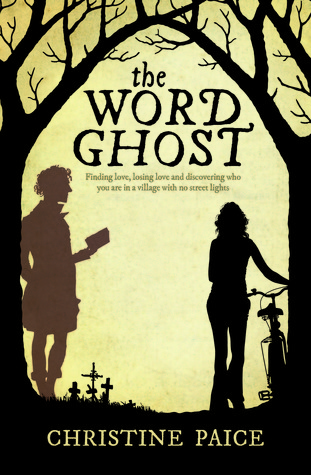 First of all, a big shout out to the Reading Room and publishers Allen and Unwin for my free review copy. Thanks!

The Word Ghost is, without fail, a real treat. This eccentric tale introduces us to the equally eccentric (but utterly likeable,) Rebecca Abraham Budde, the daughter of a Church of England minister who is enjoying a most idyllic adolescence in a small town in England in 1973. Rebecca, who would rather be known as Abraham, is fifteen years old, and rejects politics, biscuits and bombs. She accepts Walnut Whips, David Bowie, Deep Purple and Dave. Dave, of course, being an attractive teenage boy that she sees every day at the bus stop and has never spoken to, but knows that he is 'the one.' Luck is in store when it turns out that Dave is equally attracted to her. Their romance is short lived, however, after a small mishap when Dave's mum arrives home early. (Cough, cough.) Rebecca and her sisters soon find themselves being packed up and moved to an even smaller village, where their father has taken up a Parrish. Rebecca resolves to hate it there.

And then she encounters a ghost. Algernon Keats is not only the cousin of the famous poet, John Keats, but he is living in Rebecca's bedroom, where he happily writes poetry, much to the amusement of the literature loving Rebecca. And then there is Algernon's sister who lives in the house across the street. His sister went insane after being rejected by a complete cad and wants revenge, despite the fact that George March has now been well and truly dead for many years and his distant descendent, brooding artist Alex, is now living inside the house part time. Quite a few amusing love triangles abound within the narrative, with the poetry, ghosts and humour making some very interesting contrasts against the icky themes of adolescence and betrayal, with 1970s England as a backdrop. Algernon was a character I loved, Dave was a pretty accurate portrayal of an ordinary, horny teenage boy and Alex was an absolute bastard, though his character rings very true.

I highly recommend this one for fans of English Literature or anyone who just wants to sit back and immerse themselves in something a little bit different.
Christine Paice The Word Ghost