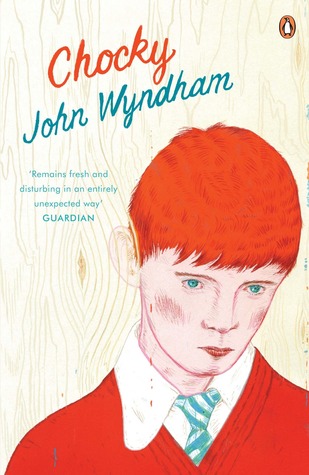 The final novel to be published by John Wyndham in his lifetime* Chocky is a slow, menacing and carefully plotted tale about a pre-pubescent boy who is befriended by an alien voice known to him as Chocky. And everyone, including Matthew's adoptive father David (who narrates the tale,) believes that the boy is suffering from a kind of psychosis. The story unfolds slowly, though by the time Matthew is eventually abducted by his psychiatrist, is it obvious that Chocky is a real being who has possessed Matthew and is using him to study earth from afar.

Unsurprisingly, given that it was published in the late 1960s, much of this novel feels very dated--the methods of psychiatry and also David's dismissive attitude toward his wife Mary and daughter, Polly. There are some lovely moments, such as where Chocky teaches Matthew to swim so that he may save Polly from drowning and where all of the members of the Gore family do their best to accommodate Chocky. The bulk of the narrative is quietly and cleverly menacing before moving toward a surprising end and Chocky's eventual departure. Although not Wyndham's finest novel, Chocky is a satisfying read. Recommended for fans of Wyndham's other novels.

*Note: Web and Plan for Chaos were published many years after the authors death.
Chocky John Wyndham