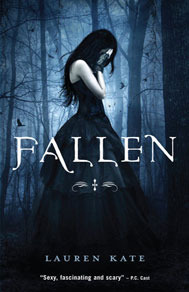 Fallen is the first instalment of a four part series about Luce and Daniel. Daniel is a fallen angel, Luce is a young woman who destiny is to fall in love with Daniel in each of her many lifetimes. The only catch is that she always dies at about age seventeen, just as soon as she falls in love with Daniel, often spontaneously combusting when they experience their first kiss. (As one does.)

Very rarely does a book leave me with as many conflicting feelings as Fallen did. I suspect that I would have loved reading this one when I was in my teens. As an adult who occasionally reads YA, however, it was a little well ... difficult to suspend my disbelief in places. The concept was brilliant; the gothic school where Luce and Daniel seemed confused and quite unrealistic. In the beginning it seemed as though Luce was in a reform school or juvenile detention centre, in other spots, they seemed to be in an strict, though co-ed boarding school which a bunch of inept teachers and dull subjects. Some of the plot threads do not weave together as easily as they could do--the fire and subsequent death in the library for example, or the fact that Mr Cole was a surprising ally. Most of the characters felt very underdeveloped to me. I never got a real sense of why all of the angels flocked to this particular school--if it were simply coincidence or for greater reasons--and I never got much of a sense of the characters and their personalities, with the poor, tortured Penn being the only real exception.

Fallen was first published around the time that Twilight was still enjoying bestseller status and inspiring a whole genre of rip-offs (dark, gothic-inspired romances featuring teens,) so I am left wondering if perhaps Fallen was rushed into publication and suffered from some poor editorial decision for that reason. But that is pure speculation on my part.

On the positive side, the prose is light and easy to read.

Unless you're a fan of the author or well inside the intended audience, then Fallen is probably going to have limited appeal.