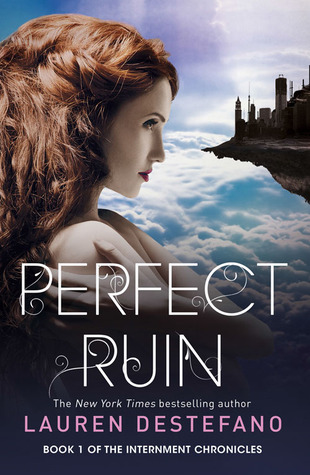 Perfect Ruin has a brilliant concept, backed up by decent writing and is written by a popular and seasoned YA author, so I am struggling to understand why I did not enjoy this one more. The concept is this: Morgan Stockhour lives in a floating city, basically a part of earth that was snatched up by the Gods and now exists in the sky, detached from the rest of humanity. This small monarchy is heavily regulated to ensure that its people live in perfect harmony and so that it does not become too populated. The most sacred rule of all is that the inhabitants of the city do not stray too close to the edge. And, naturally, there is something strange and exotic that draws many straight to the edge.

As I said, a brilliant concept for a book.

Unfortunately, I struggled a little with the telling. In many ways, the obedient and easily frightened heroine who eventually rebels, Morgan, seemed a bit dull and was difficult for me to relate to. Some of the rules that ensured harmony between the inhabitants of this small monarchy such as betrothals, no real career choices and no real freedom for independent thought, are concepts that have been explored in other YA novels that I have read recently, most notably, Matched by Allie Condie. In many ways, it felt that I was reading a book with a bland heroine and a story that I had already read before. Fortunately, Perfect Ruin diverges a bit from Matched. Falling in love with someone other than her betrothed isn't on Morgan's agenda, though you get a sense that something could develop later in the series between her and the somewhat symbolically named Judas.

Anyway, in Perfect Ruin, a young woman is murdered, the mean government want to pin it on someone who didn't do it in order to cover something else up and Morgan, who has previously been quite obedient and unquestioning, becomes a part of the rebellion against the government. The novel leads up to quite an exciting ending, as it is the first in a trilogy. I don't really want to reveal the ending here, as that would spoil things for anyone reading the book. It's original enough not to be too predictable.

In many ways, as a reader, I felt that something was missing from this book, though I am struggling to think what that missing something was. Perfect Ruin is not a bad book by any stretch, but it failed to engage me as a reader ...
Lauren Destefano Perfect Ruin