Review: Confessions of a Wild Child by Jackie Collins 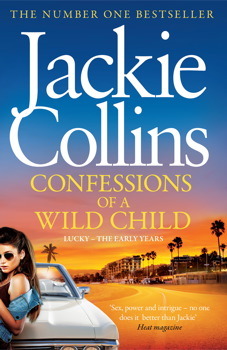 Well. It's not often that I read a book by Jackie Collins. Actually, not often would be closer to never. I bypassed her books during that part of my adolescence (that phase many teenage girls seem to go through of reading sexy, scandalous novels that are well past their years,) favouring the more sinister works of Virginia Andrews (or V.C. Andrews for those of you outside Australia). Anyway, I probably never would have read Ms Collins latest release had I not just happened to see it lying around and had curiosity not gotten the better of me.

Fortunately, I don't think that any cats were killed during my reading of Confessions of a Wild Child. However, for someone who was unfamiliar with this author, her work and the series that this is a prequel, this probably wasn't the best book to read. I found the story to be a very shallow and superficial tale of a confident and highly sexualised young woman from a family of shady businesspeople as she hops around the world, doing everything short of actually having sex with the young men that she meets, until her dad catches up with her and arranges her to be married off to some silly mummy's boy. And really, that's it. Most of the plot twists seem rather convenient (Lucky's friend Liz drowning in a swimming pool as soon as she is no longer needed and is never really mentioned again, for example,) and the whole thing seems to be designed to shock readers and to persuade them to keep turning pages. And okay, I get it. This is meant to be a glitzy, shocking page-turner, but in all honesty, I'm struggling to think of a novel that had less depth than this one.

I suppose this is a book for those of you out there who like your words light, your plot easy to follow and your story dowsed with generous lashings of sex and sin ... A guilty pleasure for some, perhaps, but this one really wasn't for me.
Confessions of a Wild Child Jackie Collins

shelleyrae @ book'd out said…
I read both VC Andrews and Jackie Collins as a teen, but this was unimpressive to me.

Kathryn White said…
I wasn't sure whether it was just a lacklustre book, or if maybe if it was something that would make more sense to readers who were already familiar with the series. Sounds like it was just a bit of a dud.

No real reason why I bypassed her books during my teens, I think the VC Andrews ones were just more easily available during my high school years.
28 January 2014 at 19:31