Calvin & the All-Important Issue of Salt 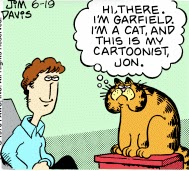 To those of you who may not have caught on yet, I am a big fan of cartoons and comics. From the age of about eight, reading the comics page in my local newspaper has been one of my favourite parts of the day. Back then, The Advertiser was a conservative broadsheet that contained just a few comics - The Phantom, Peanuts, Footrot Flats, The Wizard of ID and possibly one or two others that I have forgotten. On the weekends, the Sunday Mail offered a greater variety of comics, including Ginger Meggs and Andy Capp, along with the Possums Pages, and the (vasty superior) version of the Kangaroo Creek Gang that existed in the late 1980s. My parents rarely bought the saucy evening tabloid, The News, unless something very, very, important had happened during the course of the day and they couldn't be bothered waiting for the ABC news bulletin at 7pm. (My father did not, under any circumstances, watch the news on any of the commercial stations. Unless the cricket was on. That was different.) Anyway, on the few occasions when my dad did buy a copy of The News (like they did one afternoon in January 1991, with the headline that took up half a page that said WAR,) the comics pages were read over several times. The News had different comics, including Garfield and Calvin and Hobbes. A year later, the two newspapers would merge - or more to the point, Murdoch bought out The Advertiser and more or less rebadged The News as The Advertiser. Adelaide has never been the same since. Meanwhile, my love of comics and the comic pages would continue well on into my adulthood. Over the years I had mourned the death of Charles Schultz with his farewell comic, cried when Calvin's home was burgled and Hobbs went missing, watched as the Patterson children from For Better or For Worse grew up and had children of their own and was invited to Dagwood's birthday party. (Note: The Advertiser doesn't actually run Dagwood, so when I learned the creator was doing a spectacular crossover, I jumped straight online.) And then, every now and again, I would read a comic that somehow, reminded me of something in my own life. Like this Calvin and Hobbes comic that ran in The Advertiser today:

In this comic, Calvin's teacher very much reminds me of my old year three class teacher, Mrs Pettingill. Meanwhile, I can see a lot of myself in Calvin. Although basically a good kid, at about this age, I became somewhat talented at asking questions that my teacher could not answer. In particular, I remember a morning where we were all supposed to be doing a reading comprehension exercise that detailed how table salt was produced. The reading card stated that salt came from mines and described the process of how one mines for salt and how that salt is processed before it eventually makes its way to the supermarket shelves. Interesting enough little exercise, except for one small detail. As I said before, I live in Adelaide. And not only do I live in Adelaide, but I had relatives who lived in Gawler and Moonta, who we used to visit in the school holidays. If traveling by car, we nearly always took the Salisbury Highway. And that meant, of course, we would pass the Salisbury Salt Works. Each time that we passed, one of my parents could be trusted to mention the big mountains of salt that we could see inside the works and the process by which it was created. (Which, for the record, somehow involved extracting it from sea water.)  It was also mentioned that I had a Great Uncle Arthur who worked there. Consequently, by the time I was presented with this reading comprehension exercise, I considered myself to be quite the expert on all matters relating to how salt was made. And had no qualms about raising my hand and telling Mrs Pettingill that her reading card was wrong.

Now, I'm not a school teacher, but I imagine at this point, the sensible thing to do would have been to explain that salt may be sourced in a number of different ways and that the reading card was simply describing one of them. My teacher, however, decided to take a different option and told me that I was wrong. According to her, salt was exclusively sourced by mining, as evidenced in her reading card. Salt simply was not created by the process of evaporating sea water. The conversation was then brushed aside and I received a lousy grade for the whole exercise. The lesson learned? Sometimes teachers could be wrong.

Anyway, with this in mind, I read the Calvin and Hobbes comic again. Of course, Calvin never does very well in school and he certainly does not have a good relationship with his teacher. However, what comes through very well in the comics is that Calvin is an intelligent an imaginative individual, who simply has trouble seeing any kind of relevance in the things he is taught at school. His teacher takes very little interest in addressing his needs and far more in humiliating him at every opportunity. One can only wonder what the future has in store for Calvin when he grows up. Maybe, like me, he will eventually shrug his shoulders and realise that sometimes, other people get it wrong and that the only person he can trust to teach him about human existence is himself.
Calvin and Hobbes Salt