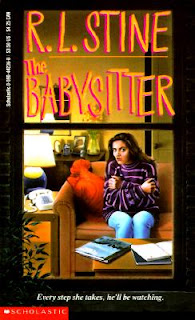 Just to prove that not all babysitting adventures from the 1990s are saccharine sweet or have happy endings, my next review is of a classic children's horror novel, The Babysitter by RL Stine. I remember being desperate to read this book at age twelve after seeing it advertised inside a Dymocks catalogue. Fortunately, my mother saw the same catalogue and bought me a copy as a surprise gift. Actually, I think she was hoping that it might encourage me to read something other than Sweet Valley High and The Baby-sitters Club. Which would certainly fit in with the other books that she purchased me around that time. Without the help of my mother, I never would have discovered wonderful young adult authors such as Judy Blume and Paula Danziger. (Parents, please take note.) But that is another story. (Pardon the bad pun.)

The Babysitter is a fairly simple but surprisingly memorable tale. It tells the story of Jenny, a high school student who takes a job babysitting a young boy by the name of Donny, unaware that the boys father is a lunatic who wants to kill her. And that's basically it. The story works well, because it plays on the notion that this could happen to anyone - Jenny is more or less an ordinary teenager, Donny's parents appear to be completely ordinary. The book also spawned three sequels, each one worse than the last. (In The Babysitter IV for example, Jenny is pursued by a pair of murderous ghost children.)

The Babysitter is also arguably one of the best of the Point Horror series that peaked in the mid-1990s, for its simple story telling and believable outcome. Written by a variety of popular authors, including RL Stine and Carolyn B Cooney, each of the novels involved an ordinary teenager who found themselves caught up in an unpredictable and frightening experience. Some novels involved the supernatural, others had logical explanations. Most of the novels and authors have been long forgotten, while others, such as The Babysitter have enjoyed numerous reprints.
RL Stine The Babysitter