As follows of this blog will know, I posted a three-part Sweet Valley High spoof a few weeks ago. Seeing as I took so much time and care to make fun of the books, I thought it might be nice to pay tribute to what is easily the most striking part of the novels - the artwork.

The vast majority of covers for the Sweet Valley High series, including the iconic circle covers were painted by James L. Matthewuse, who has painted cover artwork for many American publishing houses, including Bantam, who, of course, published the Sweet Valley High novels. Matthewuse artwork was also featured on the covers of the Nancy Drew and Hardy Boys series, as well as Judy Blume's wonderful young adult novel, Tiger Eyes.

Matthewuses' artwork was often simple but always told a story. The cover artwork for Sweet Valley High #6: Dangerous Love is a wonderful example:

On this cover, we see the normally conservative Elizabeth Wakefield riding on the back of a motorcycle. Her hair is blowing in the wind, free of the clips and pins she normally uses to hold it back. The reader know instantly that, for this novel at least, Elizabeth will be living life on the edge. The cover is far more interesting and symbolic than the 2008 reissue edition, which features an insert of a smiling, blonde teenager and a motorcycle:

He was also clever with his use of colour:


The background for SVH #26 Hostage is dark, using a mix of grey, brown and black. An attractive young woman (though not as attractive as the Wakefield twins, of course,) trembles in fear, while her faceless kidnapper  holds out a rag. It is one of the few early covers to feature the twins friend Regina Morrow, or a female character who isn't blonde. Later reissues of the book feature a pink cover and photograph of the Wakefield twins looking far older than their supposed sixteen years. It tells us nothing of Regina's kidnapping:
While some of the covers were dark, it's surprising just how sexy Matthewuse cover artwork was for novels aimed at pre-teens. This cover for a Nancy Drew/Hardy Boys crossover is prime example, offering sexual connotations that probably went by unnoticed by young readers: 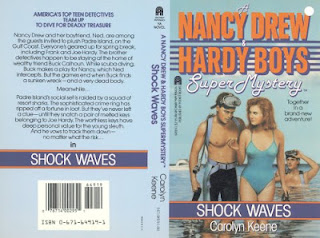 Who would have thought that young Nancy Drew could look quite so, shall we say, shapely, in her bathing costume? And I'm sure that thing in her hand is all the Hardy boys are staring at. Including the one who is half buried in the water and could not possibly see what she has in her hands. Another surprisingly sexy cover from Matthewuse is this one: 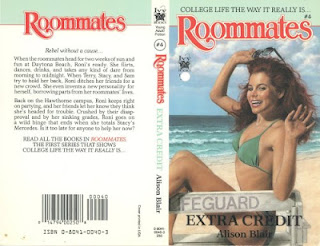 And sexy too, is this cover for SVH #54 Two Boy Weekend in which Jessica Wakefield looks remarkably like a young Marilyn Monroe. (I must confess, this is my favourite SVH cover. I'm eternally grateful that the publisher never reissued this title with a new cover): 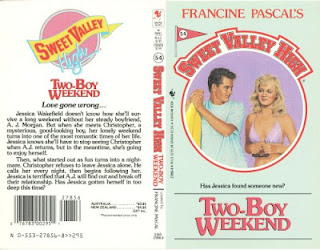 Many others, particularly those Matthewuse painted for the Sweet Valley Twins series (a spin-off series, aimed at younger readers,) suggested that Sweet Valley was a fun, wholesome, and ultimately innocent town to live in. By reading the book, you too could be part of the fun. These are all typical covers: 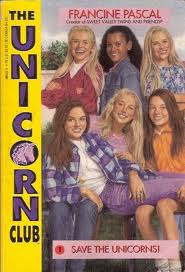 Matthewuse has painted covers for many more novels for children and adults over the span of about 30 years. Matthewuse also has a keen interest in Native American culture. Much of his recent artwork features Native Americans in traditional dress. He also paints portraits by appointment in his hometown, Tallahassee. You can learn more about him here.
James L Matthewuse Judy Blume Sweet Valley High