Review: This Winter by Alice Oseman 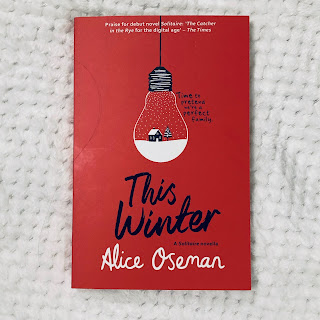 Charlie Spring is a character that author Alice Oseman seems to come back to time and time again. Initially Charlie was introduced to readers via Oseman's first novel, Solitare, as the brother of protagonist Tori Spring. From there, Charlie has starred in This Winter, a prequel to Solitare, Heartstopper a successful webcomic which later turned into a four volume series of graphic novels, an upcoming Netflix series (see more here) and a novella, Nick and Charlie. And okay, Charlie has a fairly compelling story arc, with his struggles with his sexuality, his romance with Nick, and anorexia. That's a heck of a lot of material for one teenage boy. So why then, when Oseman writes about Charlie Spring does it feel as though the author is writing fan fiction of her own work?
This Winter is set after the events of the Heartstopper and prior to those of Solitare and Nick and Charlie. It is Christmas. Charlie is home from hospital and recovering, Tori is trying to work out how to be a good sister to him, their seven year old brother Oliver wants everyone to be happy, and their parents are busy trying to organise Christmas, with involves a Christmas Day visit from their extroverted relatives who like to ask rather ridiculous and personal questions at the table. Charlie and Tori have enough, take it all out on the wrong people, and Charlie storms off to Nick's place. Then Tori convinces Charlie to come home and Oliver convinces their mother to apologise. That's basically it. The rest of the novella is padded out with pictures and a massive extract from Solitare.
The novella, or should I say, short story, feels very rushed. Although the reader is supposed to feel sorry for Charlie (and I did to an extent, the questions he was asked were rather rude,) the story is too biased toward the character. Having a mental illness is tough. Having parents who are struggling to understand how to best deal with it is tough. But there is also a failure on Oseman's part to show Charlie finding a way to accept and understand that his parents are human, and that they have feelings, and failings, just like him. Consequently, Charlie Spring remains in victim mode--it isn't Charlie who has to find his own way through, or to navigate parents who try--and fail--to understand what he is going through. It is the rest of the family, who will have to change to suit him. Of course, it's worth mentioning that the events in This Winter are set prior to Solitare and living with mental illness is an important theme of that novel. Also, Oseman was barely out of her teens when both were published, meaning that she may have lacked the life experience to view the situation from any perspective other than that of her teenage characters.
Overall, a disappointing read.
Not really recommended.
Alice Oseman This Winter