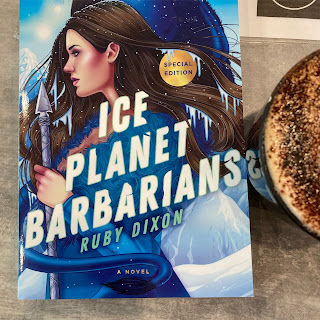 I had no idea what Ice Planet Barbarians was, exactly, when I found a copy in the Science Fiction and Fantasy section of my local bookshop. Was this science fiction? A romance? A blend of the two? Or was it something that was better described as, so bad its good.

It turns out that Ice Planet Barbarians is a little of all three. It tells the story of Georgie, a young woman who is abducted by aliens, who are a part of a bizarre intergalactic trafficking scheme, that involves human women aged in their twenties. Along the way, the ship crashes into an ice planet, known (of all the tricky, deceptive things,) as Not-Hoth. Struggling to find help on Not-Hoth, George encounters Vektal, a large, blue alien, who immediately falls in love with her and claims her as her mate. And that's fine, because in another bizarre twist, it turns out that the pair are a perfect sexual match, and that's where the novel gets quite steamy, well, so long as the reader is okay with reading about alien--human sexual encounters.

This was an entertaining read. Parts of it are smoking hot, and carefully strike the balance of remaining tasteful, being first and foremost a love story, and providing the reader with some truly eye popping moments.

Ice Planet Barbarians is the first in a somewhat bizarre series that has more than ten volumes and was first self-published in 2014. More recently, it became something of a phenomenon on Tik-Tok, which led to the rights for the first two books to be picked up by Penguin Random House and published in a special edition with a cover that leans more toward the science fiction side of the novel, and thus making it safe to read in public.

All good fun. Recommended to anyone looking for a romance with something a little bit different.