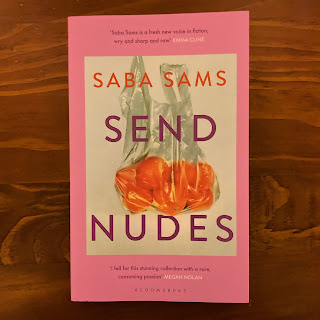 Saba Sams' short story collection with the very provocative title is a rollercoaster ride through the experiences of adolescence, early adulthood and finding a way to feel at ease with ones body. The protagonists in these stories are often in situations that are not of their choosing, some, but not all, find themselves exploited sexually, and others are suffering through the complexities of friendships and family life. In Snakebite Meg finds herself taken advantage of by Lara, her excitement craving friend and occasional lover, who she forgives over and over again. In The Mother and the Girls, two best friends who belong to a travelling circus with their mothers are inseparable until a boy becomes between them ... or does he? In Tinderloin and Here Alone, the female protagonists are exploited by predatory men. And then there is the titular story Send Nudes where the insecure, obese protagonist who seems ripe for exploitation makes a decision that empowers herself, horny men be damned.

Overall, this is a well written collection that focuses on the complexities of the female experience. Of intense friendships, exploitation by predatory men (and occasionally women,) of insecurity, of not speaking up when one should and also of moments of genuine joy and happiness. Sams writes with a lot of empathy for her characters, who feel very real.