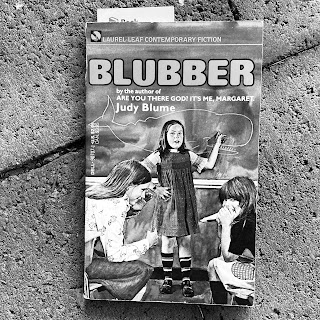 No writer has ever understood pre-adolescent politics quite like Judy Blume. Consequently her novels are always a pleasure to look back on, whether she is discussing the trials and tribulations of being an unpopular know-all in Otherwise Known as Sheila the Great, racism in Iggy's House or religion in Are You There God? It's Me Margaret. Blume's characters are imperfect, often relatable and always honest, which probably explains why her novels remain enduringly popular with their target audience as well as adults, some of them more than fifty years since they were first published.

Blubber offers a truthful look at schoolyard bullying and classroom politics, and speaks honestly with its target audience. Jill lives in a small town. She has just started fifth grade, and for her and the other kids in town, it means starting at a new school in a larger town, which only accommodates grades five and six. At her new school, she has been placed in a different class from her best friend Tracy. This is tough, but fortunately she has formed a friendship of sorts with Wendy, a bold girl from her class, and a few other kids. And then there is Linda. Linda is quiet, sensitive and very slightly chubby. Her only crimes are one, to be lonely, and two, to mention blubber or whale fat in a talk that she is forced to give the class that no one wants to listen to. Sensing an opportunity, Wendy seizes upon the nickname Blubber, which Linda does not like. Within a day, the whole thing has blown out into full scale bullying, with sensitive Linda more or less helpless against Wendy and the other kids. At times Jill joins in, at others, she is more of a passive bystander who wonders why Linda doesn't just speak up for herself, until it becomes increasingly clear to the reader that Jill and the other kids are terrified of Wendy, and that all of them join in, because they don't want to end up like Linda. Eventually, Jill finds her voice ... and becomes Wendy's next victim while Linda, desperate to avenge months of bullying, is on the attack. The eventual resolution is smart, while remaining completely realistic. It is Jill who must not only find the courage to stand up for herself at all odds, but to defeat the bullies she must also find a way to divide and conquer their group.

At times this one broke my heart, but it also won me over for its realism. I remember being involved in similar situations at that age, sometimes as the victim, sometimes as the bystander and, I'm sorry to say, sometimes as the aggressor. Blume gets the politics of the situation just right--where lonely kids can make the easiest targets, how the bullied can become bullies and why kids don't speak up and just go along with it. There are some other interesting subplots as well--in particular that of a grumpy old man and how Jill and Tracy get their revenge.

Overall, Blubber was an interesting book to revisit. It's a tough topic, but one worth remembering and discussing.