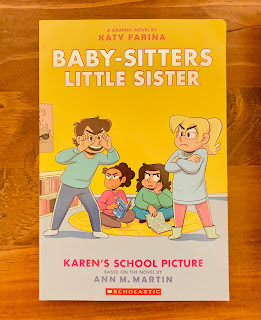 The Baby-Sitters Little Sister Graphic Novel adaptions are still going strong. Graphix/Scholastic are up to the fifth book in the series now, and there is absolutely no hint that this is going to be the last one. And it's no wonder. They've managed to update Karen's School Picture--quite possibly the most outdated book in the series--and turn it into something special.
As the title suggests, school picture day is coming up at Stoneybrook Academy. That's a pretty big deal when you're six years old, and Karen reacts accordingly. She's keen to pick an outfit and she and her best friend at the little house Nancy Dawes are preparing their winning, movie star smiles. The only trouble is, Karen has been getting a lot of headaches lately, and she's having trouble with her vision. And then it turns out ... (dramatic pause ...) Karen is having a stroke.
No, not really. (The symptoms are somewhat dramatic though, as often tends to be the case in Ann M Martin's work.) Karen needs glasses. She's somewhat resentful of the fact, but calms down a little when she finds a pair of pretty pink frames. The class teacher and her friends compliment her on her new eyewear. Then a boy in her class starts teasing her about her glasses because, quite frankly, Ricky Torres is a tool. Anyway, Karen begins to feel insecure about her glasses thanks to all of the bullying, and she and Ricky end up learning some important life lessons along the way.
What I really appreciated about this one was the way that the story was updated. In the original, Karen had to wear two pairs of glasses, because either bifocals weren't a thing back in the 1980s or because Ann M Martin had something of a flair for the dramatic. There is also no suggestion that Ricky is bullying Karen because he secretly likes her, which was, sadly, a theme in the original series that generations of girls (including myself,) could have done without. (Remember how Karen and Ricky eventually got 'married' in the playground?)
Overall, this is a fun read for kids and a cute nostalgia trip for those of us who remember the originals.
Ann M Martin Baby-Sitters Club Karen's School Picture Katy Farina