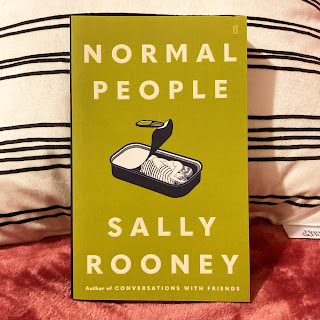 It would be  easy to sum up Normal People in one word. Overhyped. After all, Normal People has been discussed endlessly in the media, on Goodreads, on social media sites such as Instagram (better known among its many devotees as bookstagram.) The book has already been made into a BBC Three/Hulu series with a second series forthcoming and is reached the saturation point where it's possible to find Normal People gifs and memes on twitter and facebook. If readers are well, a little sick of hearing about Normal People, then who could possibly blame them?
On the other hand, Normal People clocked up some fabulous achievements. It was longlisted for the Man Booker Prize and the Women's Prize for fiction in 2018, and it won the Costa Book Award and Book of the Year for the British Book Awards. On the other side of the Atlantic, Kirkus gave the novel one of their coveted starred reviews. And did I mention that the author was in her mid-twenties at the time the book was published? It is little wonder that people want to talk about it.

However, like all books that are endlessly discussed and talked about, they inevitably find themselves in the hands of readers who pick them up, expecting something fabulous, something that they personally will love and come away empty handed? Was that my experience reading Normal People? Well, not quite. It's a good book. It's just not without its flaws.

Set in Ireland, Normal People tells the story of a pair who meet while they are still in school. Marianne is the daughter of a wealthy but cool and detached widow, while Conner is the son of the lady who cleans Marianne's house. At school, they pretend not to know each other. After all, this just wouldn't do in their town. He's the star of the school soccer team and popular among his peers. She is academic and a loner who steers clear of their classmates. Outside of school, however, a covert, friends with benefits arrangement takes place. Surely, this cannot end well?

Skipping through months at a time to tell the story of the pivotal points in their relationship, Rooney cleverly weaves together the story of two people who are at their most real selves when they are together, but feel that they cannot share their relationship with the outside world. Over time, the dynamics between the pair shift--at university it is Marianne who is popular and who fits in, while Conner struggles to adjust to his new circumstances. The pair suffer great difficulty in communicating with one another, in a way that I soon started to find infuriating. Okay, I get that Marianne and Conner both had rich inner lives, but does anyone really put so much thought into hoping that a gesture, such as a shrug, could communicate several different, and important things? Then again, in the story these gestures rarely achieved their desired effect. Maybe that was the point.

Where Normal People shines is in its meditations on peer pressure and domestic violence, handling both subjects realistically and sympathetically, which is a tough call for any author. Sally Rooney shows some true insight into human nature, and the sides of people that they often keep hidden. It's worth reading Normal People for that alone. For me, it was a good book. Maybe not a classic. Maybe not a book that will go on my list of favourite reads for 2021. And maybe it is a bit overhyped.

But Normal People is the one thing it set out to be. A good book.