Review: Down and Out in Paris and London by George Orwell 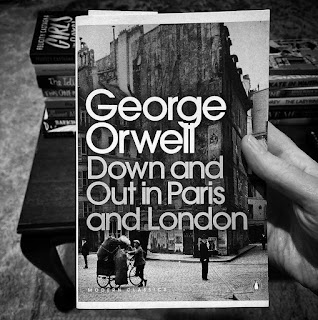 Published many years before Animal Farm (and, consequently 1984,) Orwell's Down and Out in Paris and London is a work of auto fiction, based on two stints the author spent in poverty. The first was a deliberate act, with Orwell posing as a tramp for two months in London. The second arose while living in Paris, Orwell was recovering from an injury when he was robbed.

Down and Out in Paris and London takes these two experiences and changes a few of the details and some of the names around, presumably so that people wouldn't recognise themselves or suffer any embarrassment, so that he can expose a bigger issue--of what it really means to be living below the poverty line and how easily those who have nothing can be exploited.

The novel opens in Paris (see, I told you some of the details had been changed,) with Orwell unemployed and living in a cheap hotel. An entire chapter is devoted to a vile man he meets there (basically, the man goes about in pubs bragging about how he had raped a young woman who had been trafficked to Paris, and had been forced to work as a prostitute,) and from there, it settles in to the story of how Orwell and his friend Boris search for work, live in bug infested hotels, suffer numerous setbacks, are exploited and ripped off, and how Orwell eventually finds a job as a plonguer, but even then he finds himself constantly exploited and ripped off while working a highly demanding and physical job.

The second part of the novel has Orwell returning to London, only to discover that the job he had lined up there has fallen through. With no money, he lives the life of a tramp, travelling between spikes and homeless shelters and meeting all kinds of characters along the way. It takes an honest look at how those who had nothing were treated, along with some of the misguided attempts by churches to help (which often came with the goal of converting the tramps to Christianity,) and how these attempts often went awry, especially those by the ones who were the most well-meaning, but had the least amount of understanding of what it was like to be living on the streets.

This is a well written eye opener that becomes uncomfortable reading in places, and at other points had me querying whether we treat people who have nothing any better today. Given that it was written ninety years ago, I found myself having to look a few things up (I had no idea what a spike was, and I was duly horrified when I learned a few details,) but overall the whole thing is very readable.

Down and Out in Paris and London George Orwell