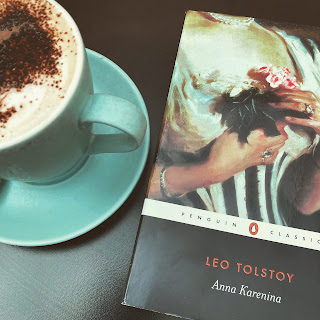 What an unexpected delight Anna Karenina turned out to be. Like many people, I was most familiar with Tolstoy's second most famous epic (after War and Peace,) for the many television and film adaptions and the tragic, climatic scene where the title character throws herself in front of a train. (Superbly and wordlessly played here by Greta Garbo.) Set in Russia in the mid 19th century, it tells of the lives of several connected upper class families, where social standing is often considered to be more important than personal happiness, and hints at the murmurings of the widespread changes that were already starting to take place within Russia though, obviously, in 1870 when the book was first published, Tolstoy would have had no idea what was to come for Russia and the surrounding countries in the twentieth century.

The novel tells the story of two different but vaguely connected relationships. The title character, Anna Karenina has come to visit her brother to help him smooth out some problems he's having with his wife. While there, she falls hard and fast for Count Vronsky, a young and unmarried soldier, who everyone expects will propose to Kitty, the youngest sister of Anna's sister-in-law, Dolly. It is clear that Vronsky returns Anna's feelings, which leaves everyone well, in a bit of a muddle. First of all, not only is Kitty heartbroken over this turn of events, but just one day earlier she turned down a proposal from Levin, a man who is honest, wealthy and completely and utterly besotted with Kitty. As for Anna, she's married to a well respected man who is many years her senior and has an eight year old son. To leave them for Vronsky would create a scandal so great that she would never be forgiven.  Heartbroken, both Levin, and Anna, leave for their respective homes. The novel tells the story of their internal struggles, and the choices they make. Each follow their heart, which for Levin will lead to a deeper understanding of himself and an eventual discovery of his spiritual side that he has spent years ignoring, and for Anna will lead to heartbreak, scandal, further heartbreak and the most tragic of outcomes.

One thing I never expected about Anna Karenina is that it reads like an incredibly well written beach novel, with plenty of scandal and romance juxtaposed some deeper musings about family, marriage, social expectations and religion. The translation (by Richard Pevear and Larissa Volokhonsky) is excellent, and there is a real poetic quality to many of the sentences. Although Tolstoy rambles on a bit, the novel never ceases to be entertaining and I found myself picking it up at every possible opportunity and reading an extra chapter or two.