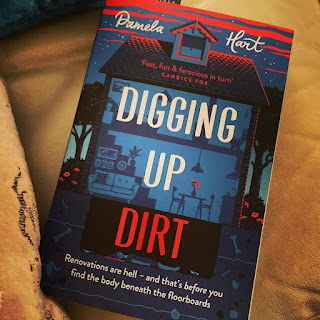 What a lot of fun Digging Up Dirt turned out to be. The first novel in a brand new series, it tells the story of Poppy McGowan, a researcher for a children's television programme made by the ABC, who has just learned that bones have been found beneath her home, an old heritage home located bang in the centre of a posh Sydney suburb. And if that wasn't bad enough, she now has to put up with the fact that Dr Julienne Weaver, an old enemy, has been tasked with examining the bones. But the worst (or best) is yet to come, when Julienne is found murdered in Poppy's house. Everyone has a motive for wanting the nasty, manipulative Julienne dead, from the members of the ultra-right wing Australian Family Party (of which Julienne was a member,) to her ex-boyfriends and most important of all Poppy herself.

This was a fun read from start to finish. While I have absolutely no doubt that it will appeal to fans of Miss Fisher's Murder Mysteries, the author's ability to poke fun at politics and the misuse of religion in a way that is both amusing and in no way at all offensive truly shines. The Australian Family Party seem a lot like certain other political parties we've seen in Australia over the years. Anyone familiar with fundamentalist mega churches will immediately recognise the Radiant Joy Church and, hopefully, get a bit of a giggle out of it all like I did. On a more serious note, I absolutely loved teenage Patience and felt that the portrayal was quite true to life.

Overall, Digging Up Dirt is a lot of fun and a rollicking read as it tackles the ultimate taboo subjects--sex, death, religion and politics.