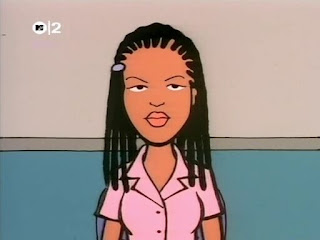 It was a while ago now that the news came through that much-loved MTV series Daria was going to get a spin-off more than fifteen years after the original series ended. The title, Daria and Jodie instantly had me wondering ... what on earth was this? A new Daria TV series, but with Jodie Landon as Daria's bestie and sidekick, instead of Jane Lane, the artist and outcast that we all love? Then, a few months ago, a new and arguably bigger announcement came through. This new series was going to be titled Jodie, with Jodie Landon front and centre. And, suddenly, it seemed that this series had a lot more potential.

For those of you who don't remember much about the original series--Daria was a teenage outcast at Lawndale High. With Jane by her side, her goal was to get through high school with as little human contact as possible. Possessing a high degree of intelligence, what Daria lacked in charisma and popularity, she well and truly made up for it with sarcasm.

Jodie Landon was one of Daria's classmates at Lawndale High and perhaps the only person other than Jane to earn Daria's respect. Jodie was Daria's intellectual equal, but had a different personality. She was outgoing, is forced by her parents to take up a number of extra curricular actives such as being Vice President of the Student Council and dating Mack, who was on the school football team. Other characters, such as Brittney often turn to her for advice. She was shown in various episodes to be pragmatic, such as in Partner's Complaint, where she is able to take a negative (only being given attention by a loan officer after that person discovers that her father is a successful businessman,) and tailor it to suit her approach when she speaks with a loan officer at a different bank. Initially, this angers Daria, until she discovers the huge lesson that Jodie has shown her about the adult world works. Consequently, Jodie becomes one of the few characters who Daria is able to learn from. In another episode, Jodie confesses to Daria that she often feels a huge pressure to be a good role model and a leader for other African American girls.

The new series about Jodie will focus on the character's life after college, as she navigates the adult world and a new job at a tech company. Given Jodie's personality as someone who is young and ambitious, it will be interesting to see how this translates when she finds herself in the adult world--and just how the series will portray the world and people around Jodie. And, of course, there is the added dimension of race. Are there really equal opportunities for girls like Jodie, or is it just an illusion?

Just as Daria was a successful spin off series from Beevis and Butthead, one which placed Daria in a new and relevant setting, Jodie has the potential to be equally successful. I wish the show and everyone who works on it well.