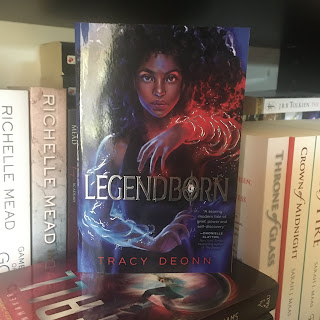 Debut novelist Tracy Deonn takes on Arthurian legend and gives it a thoroughly contemporary twist in Legendborn. Bree Matthews is sixteen years old and has just qualified to take part in an early entry programme at college. The same day she learns this news, her mother passes away in a traffic accident ... or was it? As Bree moves through the stages of grief and starts at her new school, mysterious and magical things start to happen--both on or near campus, but more importantly, inside Bree. To get to the bottom of what is going on, she infiltrates a secret society, the Legendborn, who soon reveal themselves as the descendants of King Arthur's knights. And if that wasn't scary enough, it seems that Bree herself may be their biggest enemy ...

For me, Legendborn was a novel that started out big, with a wonderful, emotional hook, a strong heroine and an interesting plot. Unfortunately, my interest began to waver after about a hundred pages in, and the novel felt overlong and packed in with a bit too much information. I felt that the plot could have improved had Bree learned her mother's secret earlier in the novel and therefore she could have infiltrated the Legendborn armed with a bit more information. But maybe that's just me and that's not the story that the author intended to write--after all, there is a lot in this novel about ancestral pain. There's a bit of teen melodrama packed into the pages as well, which was fun to read about.

Legendborn reminded me a lot of The Mortal Instruments, though this novel has two pleasing--and realistic twists. The first is unlike the Shadowhunters, the characters in Legendborn are still expected to attend school, get good grades etc. The second and more important element is diversity. Bree has certainly suffered her share of discrimination, she feels rage at the many injustices that people of colour have experienced in the United States, past and present, and she experiences both conscious and unconscious prejudice from the Legendborn. And then ... well, even if I saw the big reveal at the end coming, I didn't think it was any less brilliant.

Legendborn is a compelling read, though overlong in places.

Thank you to Simon and Schuster Australia for my copy of Legendborn.