Review: Honour and Other People's Children by Helen Garner 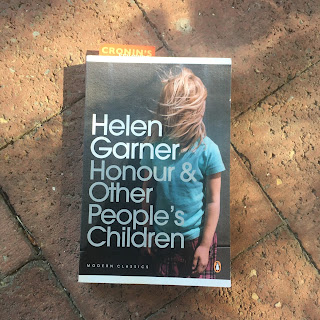 Following on from the success of Helen Garner's novel Monkey Grip was Honour and Other People's Children, two novellas published together in a single volume. Both stories talk about the breakdowns of significant relationships. In Honour, we meet Kathleen and Frank, who are married and love one another in a way, but have been happily separated for some years. Frank's new girlfriend Jenny is insisting that he get a divorce, but that is easier said than done, and all three adults find themselves having to negotiate their way around their changing relationships. In the middle of this is a child, Flo, who just wants everyone to get alone. In Other People's Children we meet Scotty and Ruth, two women who are part of a collective household, but whose differences are driving their friendship apart.

Garner writes with empathy and insight into the lives of the characters, who are all experiencing changes--welcome and unwelcome--into their personal relationships. Both are set in Melbourne sometime during the 1970s and feature working class characters, all of them living in ways that were right for them, but that challenged the social norms of previous eras.

There is no denying one simple fact about this volume, however, and that is Honour is the superior of the two stories. I found it far easier to identify with the characters and to feel empathy for their situation, and I appreciated the hopeful ending. Other People's Children is harder to enjoy. While I felt a lot of empathy for Scotty, who only wants what is best for her friends, but whose failure to give them the freedom to make their own mistakes, leads to her being despised by the others, there is no denying one thing. The story is depressing. And similar to Monkey Grip, Garner writes about collective households and relationships from the perspective of someone who has solid lived experience of those things, which means that though she writes about it well, there were some nuances that went straight over my head.

The volume was a relatively quick read for me, with one story that I loved and one that ... well, I'll have to think about it some more.