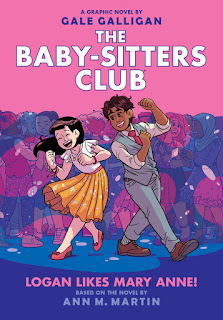 The eighth novel in the brilliant BSC Graphix series is bittersweet to say the least. On the one hand, we've got Mary Anne in the lead, we meet Logan Bruno for the first time, the girls start eighth grade and Jessi joins the BSC. On the other hand, this is Gale Galligan's last BSC Graphix novel, as she is moving on to other projects.
Opening at the end of summer, we find Mary Anne preparing to return to school and feeling well, a little emotional, because her oldest and best friend Kristy has moved across town and this year, the two will not be able to walk to school together. She's also developed a crush on teen heart throb Cam Geary, and the other members of the BSC tease her about it, as girls that age tend to do to one another. Unfortunately, Mary Anne isn't the kind of kid who takes the teasing very well. And these feelings of a crush are confusing ... and they're set to become a whole lot more confusing when a new boy starts at school who looks just like Cam Geary ... and he's got a crush on Mary Anne, only she can't see it. All she knows is how awkward it can feel to be around Logan Bruno sometimes. And all the more because he's interested in joining the BSC who are looking for new members after a new advertising campaign works a little too well.
Parts of this one follow the original closely, with the occasional tweak here and there to update the story for contemporary audiences. We still get the best parts of the original though--the party with the surprise cake, that gorgeous skirt (fans will know the one I mean,) the famous shoe incident and, of course, Tigger. Meanwhile, the B storyline reimagines how Jessi comes to join the BSC, but it is done in a way that is realistic, and that fits in perfectly with the Graphix series. It also raises the question of whether the series will be skipping the story where Stacey moves back to New York with her parents, something which Ann M Martin later admitted was a mistake for the original series. (I'd be cool with it if they did.)
Overall this one was a lot of fun, with plenty of things in there that will please old fans, while having enough to make the series interesting and relevant for a younger generation. And though I'm sad that this is Gale Galligan's last entry in the series, I'm pleased to report that in 2021, there will be not one but two entries in the series, with two authors taking on penmanship of the novels, Gabriela Epstein and Chan Chau. Claudia and the New Girl is expected to be released in February 2021 and then Kristy and the Snobs will be released in September 2021. (I don't have a firm Australian release date, however, the books are traditionally available here two to three months after their release in the United States and Canada.) The new artists will alternate between releases and will be in charge of book 9 through to book 12. After that, Scholastic has given approval for two more book in the series, with the artists and titles yet to be announced.
BSC Graphix Logan Likes Mary Anne