Review: Punching the Air by Ibi Zoboi and Yusef Saleem 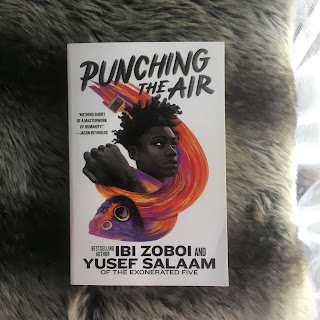 Told totally in verse and inspired by true events, Punching the Air is the story of a young man charged and convicted for a crime that he did not commit. Amal is a talented artist and a poet. He also had the misfortune of being in the wrong place at the wrong time, with skin that is the wrong colour. Circumstantial evidence, a testimony from an uptight school teacher and a lawyer who does not work as hard as he should to ensure that Amal gets a fair trial leads to him being sent to a juvenile detention facility where the odds are stacked against him again and again. It's not easy to be an artist in prison, just as it is not easy to be an independent thinker. Most of the kids in juvie are nowhere near as smart as Amal and many are far more aggressive. Racism is rife, throughout the whole prison. The programmes are mostly aimed at crushing kids into submission, rather than focusing on rehabilitation. Only a few people at the prison care, and even then, things often end badly.

This was a tough read, though an important one. The novel showcases perfectly just how prison can take an ordinary, intelligent young man and strip him of all of his dignity. It is not difficult at all to see how someone like Amal would lose hope--particularly when they are innocent of all that they were accused of. The fact that while this story is fiction, that it is inspired by true events that were personally experienced by author Yusef Saleem gives this novel an additional, chilling edge.