Review: While You Were Reading by Ali Berg & Michelle Kalus 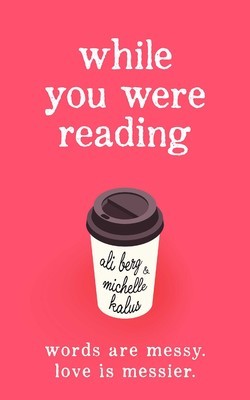 The Book Ninja was just so brilliant (or fucking hilarious as I put it in my review last year,) that I was thrilled when I learned that the book's co-authors Ali Berg and Michelle Kalus had penned another novel. This one tells the story of Bea Babbage, a woman whose life is falling apart after she accidentally ruins her best friends wedding. Moving across the country to Melbourne, she attempts to pick up the pieces in her life, discovering a great cafe and a secondhand book that has all kinds of messages scribbled inside along the way. Intrigued by the book and its notes, she begins to search for the person who wrote the notes ... with some surprising results along the way.

This one was an easy read that never takes itself too seriously. Bea was an easy character to like and spend time with, and the premise was a lot of fun. It was interesting too, to see her grow and develop, despite the well, massive, obstacle that Cassandra threw in along the way. (Speaking of, I really wouldn't have minded if the authors had allowed Cassandra to be hit by a tram.) The love triangle between Bea, Zach and Dino plays out in an amusing way. And whilst the whole thing is a little bit of fun, it never really reaches the same level of hilarity as The Book Ninja.

Overall, this one is perfect for those days when you just want to kick back and have a little fun.

Thank you to Simon & Schuster Australia for my ARC.