Review: Those People by Louise Candlish 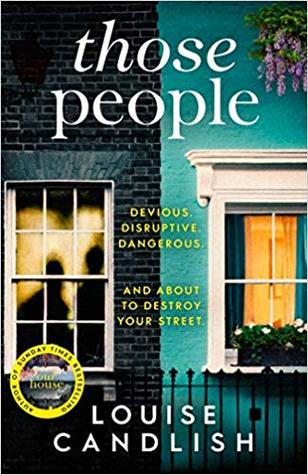 If you think that your neighbours are bad, then spare a thought for the residents of Lowland Way. A peaceful, upper middle class street, these residents have made their area a neighbourhood that they can take pride in, thanks to a number of local initiatives. Things begins to change, however, when Darren Booth inherits 1 Lowland Way from his aunt. Darren is the kind of guy who, at best, is inconsiderate, a bit rough and plays by his own rules. At worst, he's a sociopath. Within days, he has all of the neighbours offside. And when a death shatters the peaceful street, all of the other residents are certain of one thing. Darren did it. Except that the police don't agree with him. And then Darren is found dead, under suspicious circumstances.

From there the neighbourhood steadily goes downhill ...

I was intrigued--and I admit amused--by the sound of this one. Over the years, I've had my fair share of problematic neighbours from both ends of the spectrum, those who take a little too much pride in the area and expect others to follow a narrow set of rules (like most of the residents on Lowland Way,) and those like Darren who simply do not care how their behaviour affects others. Unfortunately, much of this story dragged. What could have made for an absorbing Agatha Christie style mystery, was instead stretched out into a story that didn't seem to quite know whether it was a social satire or something akin to the novels of Jodi Picoult. Still, while Darren is far from likeable, he is certainly interesting to read about.

Thank you to Simon and Schuster Australia for my ARC.
Louise Candlish Those People