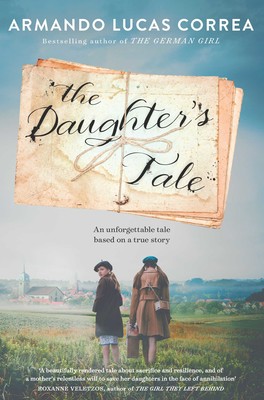 The German Girl was such a moving tale that I was absolutely thrilled when I learned that the author, Armando Lucas Correa had penned another novel. The Daughter's Tale opens in New York in 2015. Elise Duval is almost eighty years old. One day, she unexpectedly receives a phone call from Ida Rosen and her daughter Anna who have recently been to Cuba. They have some letters for her. Initially, Elise is confused. She doesn't know anyone in Cuba ... does she?

Ida insists on a visit, and she and Anna bring the letters. As Elise reads them--letters written by a woman named Amanda for her daughter Vera--memories of a very different life in Germany and then France come flooding back. From there the reader is whisked away on a tale of survival--and the strength of a mother's love--against the backdrop of one of the most shocking and shameful events of the twentieth century. The author shines as he creates a real emotional bond between the reader and the characters, though it feels bittersweet on occasions, as the reader knows that not everyone can possibly survive the horrors of living in occupied France. We watch as Elise grows from child to woman, navigating this situation the best way she knows how and kept safe by some truly wonderful people.

More haunting is the fact that The Daughter's Tale is inspired by a true story, that of Judith a Jewish child who survived the war thanks to the cleverness of her father and the kindness of others. (Read more here.)

Author Armando Lucas Correa is touring Australia this week to promote his work. Readers can see him at the following events: