Special Announcement: About a Girl by Kathryn White 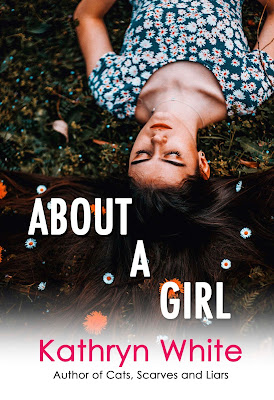 Exciting news! It's been a long, long time coming but finally, I'm releasing a new novella. The title is About a Girl and it tells the story of Callie Taylor, a nineteen year old who eloped with her high school sweetheart and then broke up with him on the same day. The blurb is below:

When Callie Taylor was eighteen she eloped with her high school sweetheart. Then they broke up. On the same day. And they never told anyone that they were married.

Almost a year later, Bill Darcy is back, living in the house next door and caring for his recently-orphaned sister. And he's determined to win Callie back.

Over the course of a single day, Callie finds herself learning some huge life lessons as she struggles to reconcile her head with her heart. Can she forgive Bill? Or, more importantly, does she even want to?

I'm really excited for this one, and not only because it is the first time that I've released a book as both an eBook AND in paperback since 2015. Callie is a wonderful character and she's certainly had more than her fair share of struggles, as I hope you'll soon discover when you read the book. There are some really fun supporting characters--I just love Callie's well-meaning but wacky mum.

About a Girl releases on the first of June. The pre-order links for the eBook are already up on Amazon and Smashwords. You can find About a Girl here:

Or check in with your favourite eBook retailer. Paperbacks should be available on the first of June.
About a Girl Book News Pre-release