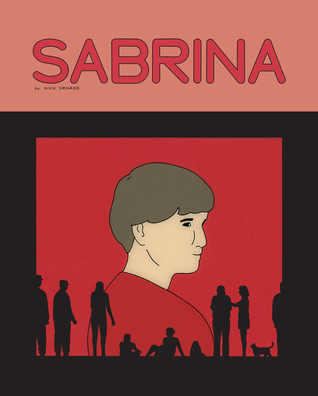 Sabrina was a revelation. I was aware that it had been long-listed for the Man Book Prize 2018, and it was the first graphic novel to do so. I knew what it was about. I knew that I wanted to read it.

What I didn't know what just how much this story would speak to me.

Sabrina is a woman in her 20s who disappears. She is last seen on her way home, outside an apartment just one block away. It's everyone's worst nightmare, the horrific stories that we see in the news, become fascinated by, but we are never quite truly able to comprehend. From there, author and illustrator Drnaso takes us into the lives of three people who have been affected by this--Sandra, Sabrina's sister, Teddy, Sabrina's boyfriend, and Calvin, an old friend of Teddy's who opens his home to his old mate. What follows is a story of the characters and how they struggle to cope with the situation. The many frames with no captions are eerily illustrative of the great emotional loneliness that each of the characters feel. They have no one to talk to and no way of expressing their emotions. Meanwhile, the discovery of what happened to Sabrina soon hits the news and more alarmingly, goes viral. From there, Sabrina's murder is discussed endlessly, the public interest becomes intense and soon derails into conspiracy theories, which in turn lead to all of the characters being the recipient of unwanted messages from people who are so unable to comprehend why such horror exists that they instead come up with some of the most outrageous theories. And all of this while they are trying to grieve.

This is a depressing and often grisly look at the worst parts of human nature and contemporary life. It's also a very important reminder that behind sensational news stories there are victims, ones who may be left voiceless and who will no doubt be struggling to comprehend how such a terrible event could happen to them. Drnaso also has much to say about technology and the ways in which, perhaps, it has not enhanced our lives.

It left me sad, but it also left me thinking that next time I hear a horrible news story, I'll spare a thought for those who are most affected by it.