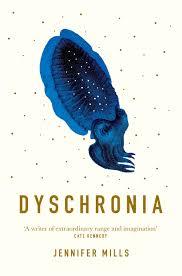 Imagine waking up in a small coastal town in Australia and discovering that the sea has disappeared. Imagine if one of the local children had been seeing visions of such an event--and it's fallout--for years. That's the premise of Dyschronia, a solid work of Literary Fiction that has three different narratives. There's Sam, the young woman who had the premonition and is now living through the fallout, a collective "we" who make up the residents of the town who speak of the event directly after it happens and a younger version of Sam, who is having her premonitions and trying to work out what they mean. Together, they form a story that is circular in nature, one that is about to happen, one that his happening and one that has happened. It's a bold storytelling device, lending itself to all kinds of interpretations and it works quite well.

The story and narrative itself is quite unsettling, though this is to be expected given the eerie subject matter. Overall this is a novel that is bold, enjoyable and different.