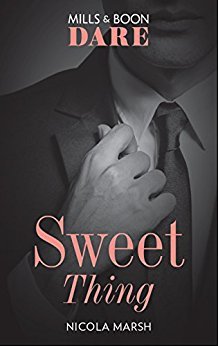 Dare is an edgy new imprint from those trailblazers of cheap, throwaway romance novels, Mills & Boon. It's basically the Mills & Boon invented for the post Fifty Shades era, a romance that is heavy on the eroticism but with a guaranteed happy ending. I read this one out of sheer curiosity and well, it does everything that the publisher promises on the back of the blurb.

Abby is enjoying her job at a high class Sydney patisserie. For the first time, she has been able to indulge in her passion--baking--and has put her horrible marriage to a man with no redeeming features whatsoever behind her. This is outraged her wealthy, social climbing parents who--like all good stereotypes of the wealthy and the heartless--believe that Abby should have stayed in an unhappy marriage so that the family could keep their place in society. She's basically been cut off from her family, and apparently their all horrified that she has chosen to be happy instead of surrounding herself with rich but nasty people. Anyway, on the same day Abby's divorce comes through, her boss has a nasty fall and somehow convinces his younger and more successful brother to run his business for a while. Predictably, Tanner is a very attractive man who comes with more baggage than your average airport. He doesn't trust Abby one bit, but desperately wants to have sex with her. And from there, the novel descends into a string of steamy encounters while each tries to convince themselves that their not falling in love with the other, and each slowly sorts their life and their emotional baggage out. Of course, there's a humdinger of a misunderstanding, followed by the sweet taste of true love. And that's really it.

There is never much depth to a book like this, but the author does a good job of delivering everything that a short, escapist novel like this one is supposed to. The leads are likeable (even when they're being quite irritating,) and there is lots and lots of sexual tension simmering in the background. And because this is a Mills & Boon imprint, the whole thing is done with a certain level of class that aspiring romance writers would do well to take note of--there is a reason why Mills & Boon is so successful.