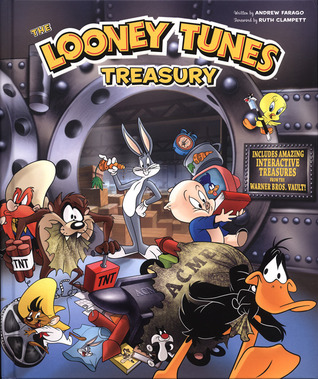 I'll confess, I've had this one on my bookshelf for a while now, since 2015 in fact, when it was first published in Australia and sold exclusively through Australia Post as part of their Classic Collectables range. For one reason or another, I never got around to reading it. I picked it out of my bookshelf the other day, intending to flick through a few pages ... and I found myself devouring this clever book in a single setting. Meticulously researched, this treasury presents itself as a collection of autobiographical essays and interviews with some of the most popular Looney Tunes characters of all time. Unsurprisingly, Bugs Bunny leads the charge with a flippant but informative interview, and Daffy Duck, who knows full well that he is the real star of Looney Tunes is rather jealous. Many of my other favourites are well represented and in character--Elmer J Fudd, Tweety and Sylvester, Foghorn Leghorn and even that annoying amorous skunk, Pepe Le Pew. There are a few surprises along the way--it's a generational and geographical thing, but I associate the characters with the incarnations of The Bugs Bunny Show that aired in Australia on Channel 9 in the late 1980s and early 1990s and also which cartoons were available on VHS during that era. Obviously, the evolution of these cartoon shorts was quite different--they were originally theatrical releases that spanned over a period of many years and at the time were competing with cartoon shorts from both Disney and MGM. Anyway, it was quite interesting to hear about that evolution from the characters themselves.

This one is a lot of fun and it appropriate for readers of all ages.