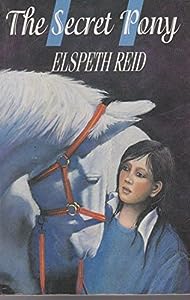 If Colin Thiele had written an episode of Home and Away, the result would have been something akin to The Secret Pony, a  children's novel from the mid-1990s that I found secondhand recently. Scartlett is a good kid who is, essentially, just trying to roll with the punches. The past year hasn't been great--her parents have split up and now she and her two younger sisters are trying to get used to life in a small, beachside town in New South Wales. The local kids don't really accept Scarlett, and she feels quite lonely. She misses her Dad, and her old friends. Most of all, she misses being able to go horse riding, something that she did often back when she lived in Sydney. (There are no stables near her new home, and in any case, her family can no longer afford to pay for riding lessons.) One night, a kind of miracle happens, when a white stallion just happens to stumble into her yard. Scarlett knows that the horse, who she names Silver, has been mistreated--and instantly suspects Wendee--a spoiled girl who has just arrived in town. With the help of Adrian, the school nerd, Scarlett finds a way to hide Silver and keep him safe.

This novel was enjoyable enough, and would certainly appeal to any pre-teen girl who has ever wanted to keep her own horse. Scarlett's adventure was a little far-fetched in places, though it made for interesting reading. (Because hey, who wants to read about kids who follow the rules. Plus her and Adrian's solutions to various problems were quite innovative.) More troubling was Wendee, the spoiled rich girl who continually wanted to do "bad" stuff such as smoking, and taking her father's Mercedes without asking and using it to do burnouts. Or, at least Wendee claims that she wants to do these things! (I suspect she just wanted to look cool in front of Scarlett.). Ultimately, the novel is an inoffensive product of a bygone era, one where children's books were filled with ordinary kids having adventures and learning some valuable life lessons along the way.

PS Some trivia: Author Elspeth Reid is the mother of actor/author Isla Fisher. She wrote two novels with her daughter in the mid-1990s, and according to the bio in the back had some other novels and short stories accepted for publication. (I am unable to find details of any of these, so I don't know if they were published using a pseudonym, or if they were published somewhere other than Australia. If anyone has any information, feel free to let me know in the comments section below.)
Elspeth Reid The Secret Pony