Review: Came Back to Show You I Could Fly by Robin Klein 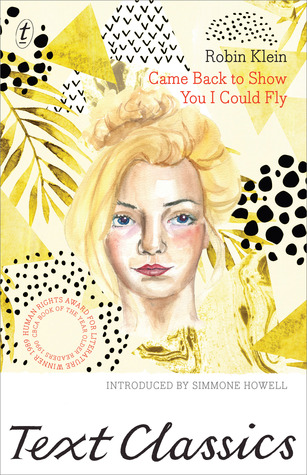 Arguably Klein's best work, there's a strange sense of hope in this novel about friendship and addiction. Seymour is a bored and lonely kid who has been sent to stay with a family friend in suburban Melbourne while his mother tries to sort out a bitter custody dispute with his father. Forbidden to leave the house, eleven year old Seymour sneaks out one day and soon finds himself being chased by a local gang. He stumbles through a back gate where he meets Angie, a friendly and imaginative young woman. The pair soon develop an unlikely friendship and help one another out. It's difficult to believe that someone as lovely as Angie might have a dark side, but that is exactly what Seymour discovers as he learns more about Angie and slowly puts the pieces together.

This is the first time that I have read Came Back to Show You I Could Fly in over twenty years--I can't quite remember how or when I read it the first time, only that our local KMart had a copy that I could not afford (and, consequently, never bought,) but I imagine that I must have borrowed it from either a school or public library. In any case, I was thrilled when Text decided to publish this one as a classic and bought a copy from Dymocks. I'm pleased to say that it still packed quite a punch, despite being written and set in the late 1980s, and despite the fact that I was well aware early on that Angie had a problem with addiction (instead of having to slowly put the evidence together, like I did when I was a kid.) Angie's an interesting character--it's clear from the start that she's keen to act like a big sister to Seymour and that she wants someone to look up to her. However, the life that she has led means there is a huge trail of destruction behind her, and she's done a lot that her upper middle class family find very difficult to forgive. I guess what, ultimately, Klein shows with this novel is the human side of drug addiction. Meanwhile, Seymour learns a few harsh lessons about growing up, though he gets through it okay.

PS In 1993 the novel was made into a film titled Say A Little Prayer. To the best of my knowledge, the film has not been released on DVD
Came Back to Show You I Could Fly Robin Klein