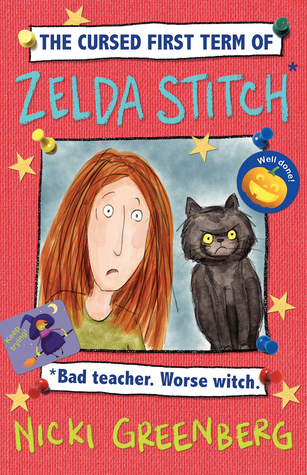 The Cursed First Term of Zelda Stitch has something for everyone--witches, a class full of crazy kids and one very sulky and badly behaved cat. Zelda Stitch is not exactly what you would call a terribly good witch. Actually, she's rather bad at it, and has decided to try her hand at something else--being a primary school teacher. Through her diary entries, we laugh and cry with her as she navigates her first term as a primary school teacher. Not only does she have naughty children to contend with, but there is MM the uptight Vice Principal and she must keep her witchcraft under control, or else her career as a teacher is finished. And then there are all the problems that are caused by her cat/companion Banarby. A rather discontented and disagreeable puss, Barnarby would much rather be the companion of someone who was a proud and capable witch--basically the opposite of Zelda. But through her first term at the school, Zelda learns some valuable lessons about working with others, and some valuable lessons about herself.

Although this one is pitched at middle grade readers, I found myself laughing out loud on several occasions, and rather enjoying all of the illustrations, especially the ones that featured Barnarby. (And what a grumpy thing he was too!) Zelda herself is a lovely character, one who readers of all ages will be able to identify with and cheer for. This one is a lot of fun, with plenty of madness and mayhem.