Review: My Life as an Alphabet by Barry Jonsberg 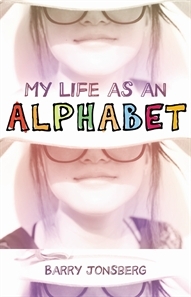 Candice Phee is twelve years old, beautifully honest and just a tiny bit different from the other kids in her class. When she is asked to write an autobiography for a school project, she takes the task very seriously, documenting her life from A to Z. And what a life it has been. Candice might be a bit unusual, but she certainly cares about her family--her mum, her dad and her rich uncle Brian, and her friend/boyfriend Douglas from another dimension--and she does her best to make them happy, with some hilarious results.

This was a wonderful and fun read about a young woman who doesn't always fit in, but who manages to come up trumps despite the odds. Candice doesn't really get along with the rest of the kids in her grade, who have dubbed her S.N. or Essen (short for special needs,) but she rejects that, and other labels that adults try to give her (such as being autistic, or on the spectrum.) She tells people, "I'm me," and I think that is all readers really need to know about Candice. She's accepting of other kids, to the point where she believes wholeheartedly in Douglas's story that he's actually from another dimension and came to this world after he fell out of a tree, and where she wants to help Jen Mashall, a bully who struggles with her schoolwork. But she also tries the patience of her parents, both of whom are still grieving for the loss of Candice's baby sister. Candice grieves for her sister in a very different way, which her mother who is not only a cancer survivor, but who also has depression, finds very difficult to deal with. But the family unit is at its best when the Phee's allow Candice to be herself, though the parents do find themselves on the receiving end of a number of Candice's strange, but well meaning, plans.

Entertaining and endearing, I think this is a YA novel that will be enjoyed by adults as much as teens.