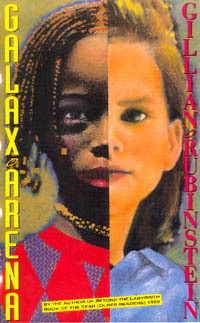 Imagine a time when children and teenagers are taken and forced to perform gymnastics for the amusement of aliens. That is the premise of this now-classic Australian YA novel by Gillian Rubinstein. As the novel opens, Joella informs us that she and her siblings Peter and Liane are on the run. The trio have experienced a terrible ordeal. Abducted by a human talent scout, the trio are taken and held captive in an arena. Peter and Liane are forced to be performers along with a group of other kids, while Joella (an unsuccessful gymnast,) is taken away to become a pet for one of the aliens. Joella has to use her will--and her wit--to survive, but who can she turn to? More importantly, who can she trust? And what is the terrible secret behind the Galax-Arena?

I first read this novel when I was in my early teens, and I was surprised by how much I had forgotten when I picked it up again. Possibly, I was a little too young when I read it and much of it went over my head. In any case, I was rather impressed by it all the second time around. Although the setting is fantastic, the deceptions and allegiances and other awful bits of human nature ring true. And one thing that I was really impressed by is the way the author presented a truth that is rarely spoken about in young adult fiction, but one that is certainly worthy of discussion--that older people can be quite jealous of young people because of their youth, and are all too eager to exploit them for that exact reason. (I wish I could elaborate on this point further, but it would be quite difficult without giving spoilers.) Joella is quite a mature and resourceful character, the opposite of her older brother, the supposed golden child of the family. The other children in the book, or pebs as they call one another, make for quite an interesting and motley bunch, who are surviving as best they can in an environment where they are forced to both trust and dislike each other. And, of course, Bro Rabbit makes for quite an interesting plot device.

This was meant to be the first book in a trilogy. The second novel, Terra-Farma was published in about the mid-1990s, while the third book in the trilogy to have been titled Universrcus remains unpublished.

Random trivia: Wikipedia lists the initial publication date of this one as 1995, while Goodreads lists it as 2001. Galax-Arena was, in fact, initially published in 1992 by Hyland House and was an Honour Book in the Children's Book Council Awards 1993.