Review: Under the Cat's Eye by Gillian Rubinstein 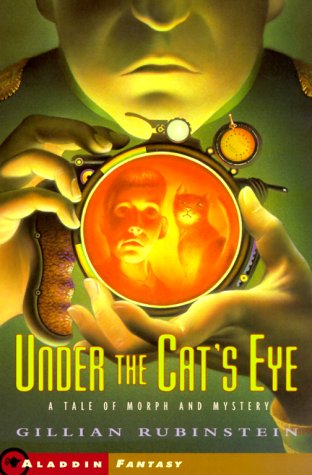 I remember Under the Cat's Eye for one reason. In my year 10 English class, our teacher along with one of the school librarians was giving us a lesson on publishing trends. At the time, children's books were dominated by one particular trend--horror--and had been for a few years mostly thanks to the almighty popularity of RL Stine's Goosebumps series. I remember the teacher holding up a copy of Under the Cat's Eye and asking the librarian how much longer she expected books like this to be around. "A year at best," was her reply. She was right. The year was 1997 and the publication of Harry Potter and the Philosopher's Stone was just a few months away, though none of us knew that, or the impact that Harry Potter would eventually have on readers across the globe. So, I suppose for me, Under the Cat's Eye has become almost symbolic of a genre that was about to well, die. It's an unfair tag to give any book, especially one that was reasonably well-written so when I found a copy in a secondhand shop this year, I decided to bring it home and give it a go.

Gillian Rubenstein is best remembered by readers for her children's/teen sci-fi novels Space Demons and Galax-Arena. Under the Cat's Eye is gothic horror, telling the story of a boy who, due to administrative problems is sent away to boarding school while his parents try to get their Australian Visas sorted out. Jai is a sensitive, pre-pubescent boy who notices almost immediately that there is something very wrong at his school, something that involves the principal Mr Drake. What comes next isn't completely expected ...

This book is well written, a little dated, but, ultimately, a lot of fun. Jai's an interesting character--he's more of a person for the reader to identify with, rather than being the hero, or a special chosen one. There is a little bit of sci-fi in there, but that element is best left to be discovered by readers.