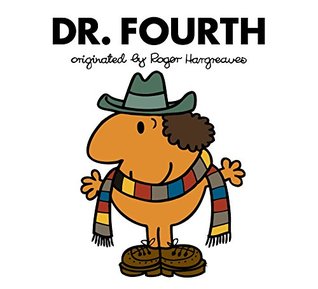 The moment that I saw this clever Mr Men--Doctor Who mash up for sale in Dymocks I knew that I just had to buy it and take it home. There has always been something delightful about the simplicity of the Mr Men universe (after all, the books are aimed at schoolchildren,) from the characters to the chatty narratives. And the worms. (Because one cannot talk about the Mr Men books without mentioning those worms.) In contrast, the Doctor Who universe is complicated and ever changing. What a delight it is, then, to see the Doctor placed inside this simple universe. All of the trademark features of the fourth doctor have been included, his scarf, his love of jelly babies and, of course, Sarah Jane is in the thick of the action.

In this adventure (which will be one of the twelve volume set,) the Doctor and Sarah Jane use their skills as time travellers to outrun and outwit the Daleks. The Mr Men version of the daleks is a hilarious parody, in this one we see a Dalek exterminate a tennis ball rather than play with it, chase a poor worm, and we encounter Dale a Dalek who isn't quite as good at exterminating things as the others. Dale doesn't quite sync in with the traditional kind of Dalek, but that seems all right because it adds a bit of humour and this story is a bit simpler than your usual Doctor Who adventure.

Anyway, I thought this one was a lot of fun and hope to explore some of the other titles in the series soon.