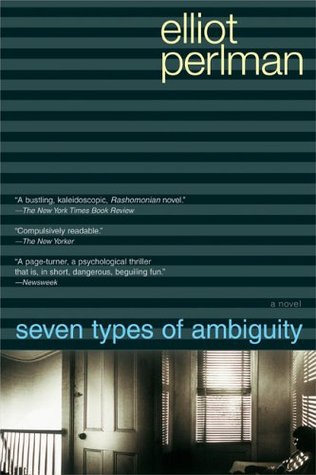 Seven Types of Ambiguity is a novel that is long, wordy and oddly addictive. Set in Melbourne, it opens with an account by a renowned psychologist about a recent incident in which his patient--a young man who is obsessed by his ex--abducted her son. No harm came to the child, but Simon's fragile mental state and his relationship with his ex are the springboard for this story, which is told from seven different perspectives. Each and every one of these perspectives is a little bit different. The lines between right and wrong--and who is telling the truth--blur until a small, final chapter inserts a very clever but heartbreaking twist. (On that, I wondered if history was doomed to repeat itself with Rachel and Sam.)

I heard of this novel thanks to the recent ABC television series and although I didn't see much of the show, I can see how this one would translate very well on the screen. The author has a lot to say about how lives can be tainted in the pursuit of wealth, sex and a notion of being a person who has it all. The female characters don't have it easy, whether we're talking about Angelique, the prostitute with a heart of gold or Anna, whose choices led her to a loveless marriage. Simon himself is a tragic character--intelligent, charismatic but defined first by the end of his supposedly perfect relationship, then by random incident that lead to the loss of his job, and by a decline in his mental health. It is more difficult to feel sorry for Joe and Mitch, Alex is a character best discovered by the reader, and a big part of Rachel's character is to let us know where the others are some years later, and to ponder, perhaps, if she does not have an obsession of her own.

Unsurprisingly, there are a number of references in the text to its namesake, William Empson's Seven Types of Ambiguity.

At more than 600 pages, this one may take a while to read, and the story and characters may become infuriating on more than one occasion, but the journey is well worth it.